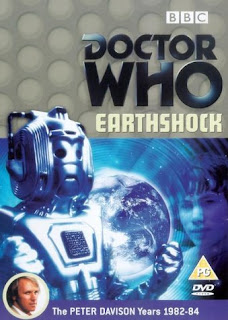 Earthshock is at heart a story built around the return of the Cybermen to the screen after a pretty long absence. It thus reflects the tendency of 80s Doctor Who to look to it's past to revitalize itself. While Earthshock attempts to recreate many of the elements of 60s Doctor Who, it dresses it all in a very 80s packaging, confidently at home in the screen culture of movies such as Terminator and Alien. Despite the miserable bickering at the beginning and the mournfulness of Adric's death, Earthshock shows a new energy and vitality that had been missing in much of season 19 (and which did was not to be seen so much again until season 21).

A lot of harsh things have been said about Eric Saward, perhaps some of them deserved. Nevertheless, in Earthshock, Eric Saward introduces his vision of Doctor Who and it's an impressive one. Lots of action, bleak design, enemies that have real menace, realistic violence and a sense of despair in a very dark cosmos. More was yet to come when Saward took over as script editor. 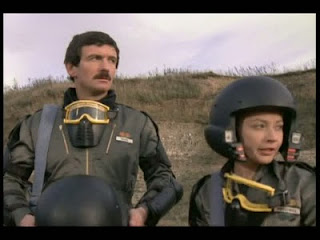 The story opens with a bunch of futuristic soldiers. They are mixed-sex platoon, with an about equal number of male and female soldiers. Some of the female soldiers are awfully cute. I love the fact that even as late in 80s everybody onscreen uses received pronuniciation. Being somebody who generally sounds pretty posh, I would have stood out less back then. Hence, most of the dolly soldiers speak very well. The military unit reminds me of the soldiers in Joe Haldeman's The Forever War. I can't help wondering whether, like the mixed-sex units in The Forever War, the platoon in Earthshock have mandatory confraternity. The troops are lead by Lt. Scott (James Warwick) who acts incredibly butch throughout the serial. Lawrence Miles and Tat Wood argue that though the soldiers are very similar to marines in countless American films, like Aliens, they are a new breed in Doctor Who. These soldiers reflect a new kind of gritty professionalism which had come to be the public perception of the military in the 1980s.

At the start of the first episode, the TARDIS crew are falling out with each other again. In particular, Adric is throwing tantrums and being obnoxious. Adric is not the companion-I-love-to-hate (for me that is Jo Grant), but when I watch Adric's behaviour in the first episode I understand why some fans cheered at his death. Still, it's fun to see the Fifth Doctor losing his temper.

The action get's started pretty quickly in episode one, with some very impressive, sleak androids killing several of the soldiers. I must say, showing the melted remains of those killed by the androids was pushing the boundaries of taste a bit. Towards the end of the episode, all is revealed and the Cybermen turn out to be the bad guys. I imagine thousands of young fans must have punched the air at the time.

The Cybermen have been given a new look in this story. I have mixed feelings about the new version of the Cybermen. They look reasonably impressive; the visibly human mouth is an excellent touch. However, I prefer the blank features or cloth face mask of the Sixties version. They come across as a lot more malicious. It is also very obvious that they have emotions. It is of course perfectly possible that Cybermen really do have emotions and all that talk about them being purely logical is a delusion. However, this does render dialogue about them being emotionless a bit irritating. Why does the Doctor not just point out the obvious fact that they are emotional beings? I can imagine the Fourth Doctor getting a real kick out of doing that. On the other hand, it must be said that the Sixties versions of the Cybermen (apart from in The Tenth Planet) often came across as brainless zombies. The Earthshock Cybermen are a far more intimidating on an individual level. I always crack up when I hear the Cyberleader command "More power!" and clench his fist to add emphasis! Whether they have emotion or not, they certainly have testosterone! I agree with Lawrence Miles and Tat Wood, in About Time, that the Cybermemn are time travellers are time travellers from the future. This makes sense of both their strategy and their knowledge of events in Revenge of the Cybermen.

There are an awful lot of problems with the plot of this story. I do not think, however, that they particularly detract from the power and excitement of it. Doctor Who at the best of times has always required viewers to occasionally make a leap of logic. I think it is fair to recognise plotholes, but you will find them in the best of stories. This story is so filled with action, that you are likely to miss at least half of them.

Peter Davison's performance still shows the lack of charisma that bedevils his first season and much of his second. This is unfortunate, because this story is so reminiscent of season 21, where he really came alive. 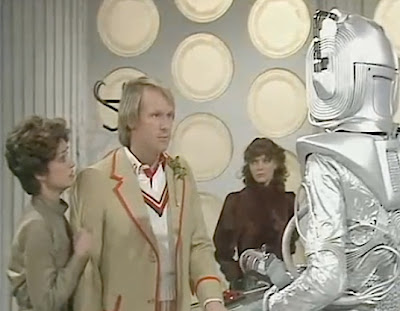 Tegan gets to do her Ripley bit, putting on a futuristic jumpsuit before going into action and blasting a Cyberman. It is rather convenient that Kyle was wearing a full set of clothes underneath her jumpsuit, though I suppose she could have borrowed one of the outfits in the TARDIS wardrobe (were there no practical outfits in there for Tegan to use?). Nyssa, as usual, does next to nothing in this story. You have to wonder why they even bothered creating this character.

The casting of renowned actress Beryl Reid to play the Captain Briggs was an odd choice, but there is something delightfully surreal about the standard sci-fi role of starship captain being held by a grumpy, bitchy old lady. 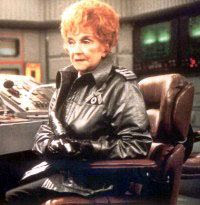 This story is by no means the best story of the Peter Davison years, but it certainly is a strong one and a memorable turning point in the history of the show.
Posted by Matthew Celestine at 11:30