The Book of the War, edited by Lawrence Miles (Faction Paradox) 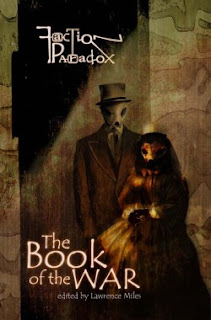 Between the age of 11 and 14 I was massively into Games Workshop's Warhammer 40,000 game. This is a tabletop war game in a setting far into the future. Warhammer 40k is probably one of the most vivid and fascinating fictional universes ever created. I gave up Warhammer 40k when I was 14, but in my twenties I would actually buy the Games Workshop magazine, White Dwarf, not because I had taken it up again, but just to enjoy reading the background material. I think Warhammer 40k has gone downhill massively in recent years because of the efforts of Games Workshop editors to impose too much uniformity on their universe. They got rid of something that really made it work; the quirky sense of humour that characterised the background material in the early nineties. Reading The Book of the War reminds me of reading Warhammer 40,000 rulebooks and source books back in the early days of Warhammer 40k. It definitely has the feel of a role-playing source book, with all the elaboration on key characters and factions. It portrays a bleak and rather disturbing cosmos, yet embues that cosmos with a tongue in cheek humour. If the idea of buying a gaming book just to enjoy the source material makes any sense to you, then you are probably going to enjoy The Book of the War.

Lawrence Miles has always been much better at building worlds than coming up with effective plots. His books are always full of brilliant ideas, but tend to ramble and plod a little. This book therefore capitalises on his strengths by dispensing with any plot and just gives a A-Z guide to the various elements of the universe he effectively created out of Doctor Who. He is assisted in this by an imaginative group of writers notably including Simon Bucher-Jones and Mark Clapham, co-authors of the impressive Taking of Planet 5 within the BBC novels original War in Heaven arc.

The key elements of the War in Heaven, Faction Paradox, Celestis, humanoid TARDISes, Mictalan and the mysterious Enemy were all introduced by Miles in the BBC Doctor Who novels. Unfortunately, this stuff was too radical for the BBC range to handle properly so it was all retro-erased in The Ancestor Cell. The Book of the War undoes the destructive work of The Ancestor Cell and expands upon this new and disturbing version of the Whoniverse that we glimpsed in Alien Bodies.

For legal reasons this can't be proper Doctor Who. There are possible references to the Doctor if you look for them, but this is a book about the universe he might have inhabited rather than about the man himself. The elements created by Miles himself, such as Faction Paradox and Compassion are allowed in, as well as Cwej and the Yssgaroth with the permission of their creators. Other key Doctor Who elements have had a change of name. Hence, we get the Great Houses in place of the Time Lords and timeships for TARDISes. The War King is thought to be the Master and the Imperator is definitely Morbius.

The Time Lords, or Great Houses, as they are called in the book, are very much Lawrence Miles vision of the Time Lords. His genius is to combine the two models of the Time Lords that we get in Doctor Who; the predominant Robert Holmes idea of a corrupt and sinister society and the early War Games image of god-like beings. The Great Houses are as Machiavellian as they get, but they are also shown to be an almost all-powerful elemental presence in the universe. It is the Great Houses who have made history what it is. The War is not exactly a physical assault on Gallifrey, but an attempt to overthrow history as the Time Lords have directed it.

The Book of the War does not reveal the identity of the Enemy (would you really want it to?) but does give some elaboration of how they fit into the concepts of the War. Cleverly, a list of entries is offered relating to the Enemy with some intriguing titles, but these are purposely missing. It's a very clever way to play with the reader.

I was very glad to see the use of the Yssgaroth, courtesy of Neil Penswick. These help to tie this world to the mythos of Doctor Who. We get some great discussion about their history and relation to the Time Lords. Neil Penswick never made clear in The Pit whether the Yssgaroth are supposed to be the same as the Great Vampires in State of Decay. The Book of the War essentially treats them as the same. It also introduces the Mal'akh, humans who have been tainted by the Yssgaroth. These are identified with the Nephilim of Genesis 6 in the Old Testament.

One has to admire the sheer scope of this book. It does not simply describe characters and settings but outlines an entire cosmology. As well as the satire of popular culture that one can expect in a Miles book, we also get explorations of philosophy and temporal physics. The book often offers conflicting perspectives on the various concepts and characters, some psychological, some scientific, others theological. This leaves a certain doubt about the whole truth of the War.

In the About Time guides to Doctor Who, Miles and Wood distinguished between science fiction and fantasy by arguing that science fiction deals with humanity's relation to tools, while fantasy deals with humanity's relation to symbols. The Book of the War is totally in the latter category. It is a book about symbols and concepts. For instance Faction Paradox's 'Eleven Day Empire.' The historical change from the Julian to the Gregorian calendar resulted in the loss of eleven calendar days. Rather than treating them as merely words and numbers on a paper calendar, these days are treated as having an independent existence which can be used as a stronghold for Faction Paradox. The Book of the War outlines a kind of Platonic metaphysics in which concepts have a real existence as entities. Hence a creature called a 'Memovore' can actually eat concepts! The concept of 'Biodata' does not seem radically different to Plato's concept of the 'Forms.'

One of the greatest aspects of the book is the playful use of language. Some of the titles of the entries are delightful- The Broken Remote, Production Hell, The Unkindnesses. Take the City of the Saved. A lot of readers were annoyed by that, thinking the idea of a city containing the resurrected form of every human who ever lived smacked of religion (there seems to be a big atheist contingent in fandom). Reading the word 'Saved' makes one assume that theological salvation is in mind. However, this is deconstructed in the novel Faction Paradox: Of the City of the Saved..., where somebody points out that 'saved' can refer to data being saved on to a disc or computer drive.

If you are fascinated by the Time Lords, if you enjoy exploration of the background of Doctor Who or you just love reading Lawrence Miles' leftfield ideas, you really need to read this book.
Posted by Matthew Celestine at 02:57