The Church and the Crown, by Cavan Scott and Mark Wright (Big Finish audio) 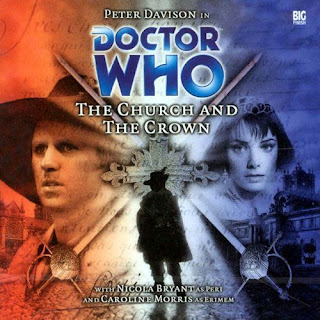 "I'm more of a leotard and shorts kind of girl."

It is really nice to see Big Finish producing so many pure historical stories. For some reason, the Fifth Doctor has been given an awful lot of them. I suppose it is easier to see the Fifth Doctor take on the role of passive bystander than the Sixth or Seventh Doctor.

The Church and the Crown very much feels like The Androids of Tara. You have scheming nobility, a royal with an uncanny resemblance to a companion and a general sense of fun. This is a good thing as I am a big fan of Androids of Tara.

There is nothing much in this story that is original. We have seen the 'uncanny likeness' idea used countless times in Doctor Who and it feels no more convincing here than it does in any other story. Nevertheless, it is still highly enjoyable.

Peter Davison is pretty good in this, though the Fifth Doctor's historical namedropping comes across more like th Third Doctor. Nicola Bryant does a fantastic job of playing two roles. While the doppelganger think might not be original, it is interesting to hear it being pulled off effectively on audio. Peri's cute friend Erimem, played by Caroline Morris is also great. While 17th century Paris is alien to her, she feels instantly at home in the court with all its nobility, religion and intrigue.

I like the way historicals offer a little education and The Church and the Crown is no exception. I like the way the Doctor challenged Peri's Dumas-influenced perceptions about Richelieu being the bad guy.

The Church and the Crown captures a sense of light-hearted fun that is missing from a lot of Doctor Who audios and novels. It's definitely worth a listen.
Posted by Matthew Celestine at 09:31