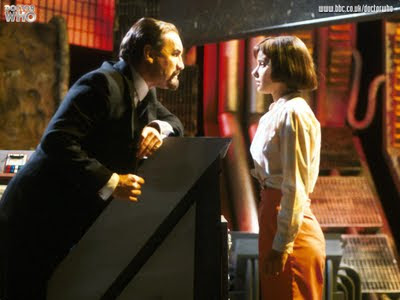 The Five Doctors was not part of either Season 20 or Season 21, but it provided a very definite introduction to the ethos of the season it preceded. The return of an whole bunch of old monsters in The Five Doctors set the scene for the return of the Eocenes in Warriors of the Deep.

In The Five Doctors, the Fifth Doctor is placed in a nightmare realm full of monsters and enemies where his very existence is threatened. When he escapes this realm, he finds that his own society is corrupt to the core and his old mentor has fallen into dark ways. One of my favorite moments in Doctor Who is when the Fifth Doctor looks with horror at the black-clad Borusa and says "What happened to you, Borusa?" His look reveals not only horror and disgust, but genuine compassion. The Five Doctors is essentially Season 21 in microcosm.

Season 21 is all about the innocence and moral purity of the Fifth Doctor struggling with a pitiless and brutal cosmos. In Warriors of the Deep, he is faced by Eocenes that want to wipe out humanity and humans are close to wiping out each other. His inability to handle this situation leads to the death of everybody in the serial. From this he moves on to Resurrection of the Daleks, where he resolves to kill Davros, but can't do it.

More than any of season, Season 21 is bound by an overarching theme. It's not a story arc, but more of an aesthetic. There is a real sense of tragedy as we see the Fifth Doctor faced with the grim realities of the universe. This climaxes with Caves of Androzani, where he is just sick of it all and cares for nothing but saving the life of Peri. This leads to his death. This tragedy is doubled by the complete alteration of his persona in his regeneration. The innocence and kindness of the Fifth Doctor are destroyed by the madness and horror of the season and we see him taken on a new form that is thoroughly unstable, violent and rather repulsive. It might have been a colossal mistake to end the season with The Twin Dilemma, but it fits the theme of the season perfectly.

Peter Davison is at his peak in this season. We saw glimpses of a more charismatic Davison in Season 20, but it's in Season 21 that we really see him come to life. Mark Strickson and Janet Fielding are also very strong here too.

Season 21 sees the introduction of a great new companion, Peri. Peri has been unfairly derided for being 'eyecandy' and lampooned for her terrible accent, but she really is a great companion. She gets on so well with the Fifth Doctor, though admittedly not so well with the Sixth.

Not all of the stories of Season 21 are brilliant, but with the exception of The Twin Dilemma, they manage to maintain a certain standard.

It rather fails to hold all its elements together, but it is very enjoyable. Having an impersonation of Hartnell was just wrong though.

Cruelly maligned by fans. It has some problems with the direction, but it is a fantastic story with some great sets and cracking performances from the regulars.

Some great elements, but two episodes are not enough to make the story work.

Creates a real sense of bleakness and tragedy, but the temporary destruction of the TARDIS feels like an afterthought.

Resurrection of the Daleks- 6/10

Did Saward really have to kill off so many characters? Ultra-violent and grim, it looks impressive, despite having an utterly confused plot.

Very glossy production, but the plot is a bit lacking in substance.

Brilliant scripting meets brilliant direction for the tragic end of the Fifth Doctor.

How could they end the season on such an awful story? Peri's reaction to the new Doctor is worth watching though.
Posted by Matthew Celestine at 03:11