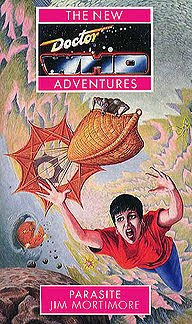 Parasite is not one of the most popular of the Virgin novels. It's certainly not one of my favorites, but I can't say I was particularly disappointed with Jim Mortimore's work here.

As might be expected from a novel entitled 'Parasite' there is an immense sense of visceral horror, with various forms of body infestation described. The sense of body invasion certainly gets under one's skin when reading. I am faintly reminded of Neal Asher's 'The Skinner,' which also creates a similarly vivid alien ecosystem.

The Artifact is beautifully described. The sense of a totally alien environment is a little reminiscent of Arthur C Clarke's Rama novels. The notion of mountains, oceans and jungles floating in a vast zero gravity environment is quite breathtaking. While the world-building is excellent, the plot did tend to meander a little too much.

As with Blood Heat, Mortimore puts the characters through an immense amount of physical and psychological trauma. He does this in an intelligent way, however, and avoids the gratuitous pain that Simon Messingham inflicted on his characters in Strange England. The author does, however, make the mistake of too many New Adventure novels in killing off too many characters. Sometimes it is nice to see characters survive rather than die miserable deaths.

The Doctor's role in the plot is underplayed; the attention is given to Ace and Bernice, though I think this book captures the Seventh Doctor well. It seems clear to me that Mortimore was very keen on the NA portrayal of Ace as a violent thug. The Ace we see in this novel is very much an aggressive person who has been conditioned by her intense military experience. As perverse as it is, I really do tend to prefer this NA portrayal of Ace to the rather uneven performances that we got from Sophie Aldred in Seasons 25 and 26.

Parasite is in my judgment a reasonably good Doctor Who novel.
Posted by Matthew Celestine at 04:16