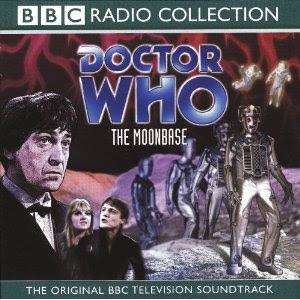 I was completely bored out of my skull listening to this audio. This story was the second novelisation I read (after Revenge of the Cybermen) when I first took an interest in Doctor Who, so I knew the story pretty well. I did not get anything out of listening to this audio recon. I really don't know why I keep buying these CDs, it just seems utterly pointless.

The Moonbase is similar in plot to The Tenth Planet, but it adds a new dimension in giving the Cybermen stealth infiltration tactics. Thus, it became the standard template for the classic base-under siege story. I imagine it was probably quite exciting the first time round, but after watching so many other variations on this story, it really is quite uninteresting.

I love Troughton and I appreciate that his era is much celebrated by fans, but for me this is the period when Doctor Who went wrong. After the wild diversity of the Hartnell era, we ended up with Doctor Who becoming a show about monsters and Body-snatcher style alien infiltration. It's only when we get into the Graham Williams years (a period with its own faults, I know) that there was a real attempt to move away from monster themes.

The Second Doctor writers gave the Doctor a new sense of direction and purpose, but it is not a particularly interesting one. Troughton's Doctor basically summed it up in this story:

There are some corners of the universe which have bred the most terrible things. Things which act against everything we believe in. They must be fought.

This Doctor is all about fighting monsters. The word 'bred' suggests things that by their very nature are evil. The Doctor does not explain what the things are that we are supposed to believe in, he just assumes we are all in agreement. I don't mind the Doctor using lethal force to deal with threats and danger; I don't see him as a pacifist, I just don't care for the Troughton idea of the Doctor as a wandering monster-hunter.

The Two Doctors and Warriors of the Deep can be seen in different ways as satires of the whole Moonbase approach to Doctor Who. The Two Doctors subverts and deconstructs the values of the Second Doctor. The unreflective viewer is shocked to see the Second Doctor applying his 'terrible things' logic to the humanoid and rather amusing Androgums while forgetting that we don't mind him being beastly to the alien Sontarans. Warriors of the Deep, on the other hand, subverts the structure of the base-under-siege genre. In place of the needlessly complex and padded plots that we typically get, we have an extremely linear plot. The solution to the alien menace is revealed right at the beginning making the ending obvious. Instead of focusing on how the Doctor will save the day, the emphasis is placed on the pointless and terrible carnage involved. Both stories have been savaged by traditionally minded fans.

The Cyberman voices are cool in this story, though I prefer the more human sounding Cybermen in The Tenth Planet, where interestingly, Ben feels remorse about killing one.
Posted by Matthew Celestine at 08:14