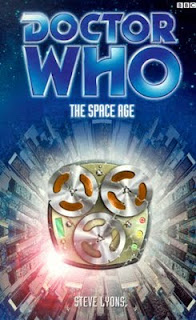 This is the city: a technological paradise built by an advanced race. Its glittering towers reach proudly for the stars, and its spires are looped by elevated roadways.

The people that lived here were enlightened and contented. They travelled in bubble-topped saucer cars, along moving pavements or in anti-gravity tubes. Obedient robots tended to their every whim. Disease, war, famine and pollution had been eradicated. Food machines synthesised all essential nutrients into pill form, and personal rocket ships brought the solar system within reach. The people of the city befriended Venusians and Martians alike.

The city is self-cleansing. Its systems harness solar power and static electricity. Its buildings are constructed from a metal that will never rust or tarnish. It will stand forever as a monument to the achievements of the human race.

Welcome to the Space Age.

That was the cover blurb on the back of The Space Age. I think it is safe to say that this is the most amazing and mind-blowing cover blurb in the history of Doctor Who books. The big problem is that no novel could possibly live up to the expectations generated by such an amazing summary. One ends up feeling rather cheated by it.

Steve Lyons is in my opinion, one of the best Doctor Who novelists ever. I can't imagine him writing a bad novel, but this one certainly does not quite live up to what I had hoped of it. The Space Age is not as bad as some readers claim. It is a fairly interesting and very readable novel.

While the cover blurb would lead us to expect a story about alternate timelines or parallel realities, what we get is a sort of sci-fi version of Lord of the Flies. A group of teenage Mods and Rockers from the Sixties were transported to an alien world and have been fighting their old battles (interlaced with family feuds) for decades. We don't get much explanation of exactly how this rather select group of people ended up stranded in this alien environment, other than the three main characters. The characters in The Space Age are not terribly likable. I imagine if you have been stranded in a strange place most of your life, you might feel a bit grim, but its hard to identify with them, especially the way they have continued their pointless battles. It seemed odd that there was absolutely no mention of sex. One might imagine that sexual politics amongst this group might be rather important, especially given the significance of a wedding in the background of the characters. I thought the Doctor Who novels were adult territory where sex was allowed to be mentioned. The setting in the futuristic city is very while described and portrayed at least.

Fitz was pretty good in this story, with his tall tales. I think more could have been made of his background as somebody from the Sixties himself. Here he is with a group of people from his own time; we might expect him to have more affinity with them than some of the other people he has met in other books. Compassion is unfortunately written out of most of the novel. She is used well, but it is annoying to see Lyons having the same problem with Compassion as other novelists. The Doctor is okay.

There is a distinct lack of humour in this book. In places, it has a slightly preachy tone. The theme of the futility of conflict does feel just a little bit old.

The Space Age is alright in my judgement, but disappointing and nowhere nearly as good as some of Lyons' other books.
Posted by Matthew Celestine at 01:34