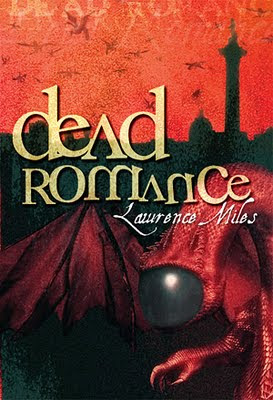 The founder of time-traveller society was a great thinker, a great scientist, a great philosopher, and a great politician. That's what the stories say, although whenever Cwej told me the stories he always got distracted and started talking about rocket-ship fights with giant vampire-beasts. But the statue in the fortress? Just a great warrior. Because warriors were what Cwej's employers needed, I suppose. Warriors were what they wanted their agents to be.... When I think about Cwej, I sometimes end up thinking about two different people. Nice Cwej, who used to snuggle up next to me and watch night-time TV in the flat. The Cwej of cuddles. And Warrior Cwej, who did whatever his employers told him to, right up until the end. The Cwej of Holy War. The Cwej of Destruction. I think I know which Cwej is going to end up on top, if his employers ever get round to writing their history of their fight agaist the Gods.

Dead Romance was originally published as part of Virgin's Bernice Summerfield range of novels. It was more recently republished with minor changes by Mad Norwegian Press. It is not actually part of the Faction Paradox series (they are never mentioned in it), but does provide some background to how the Faction Paradox ideas and concepts developed. It is difficult to fit Dead Romance into any sort of continuity. The bottle universe idea was Miles' way of illustrating his denial that the Virgin and BBC novels occupy the same universe. The novel is part of a story arc within the Bernice Summerfield novels, but now that it was republished independently, it is not clear that this continuity still stands. Do the revelations about the Gods in Twilight of the Gods apply to the new edition of the book? The ideas in it are similar to those in the Faction Paradox books, but are certainly not identical. It's not at all certain that the Gods in Dead Romance are the same as the Enemy in The Book of the War.

This novel is closer to being Doctor Who than the Faction Paradox books. Cwej, first introduced in the New Adventures, is one of the main characters. Bernice Summerfield does not appear, but is referred to throughout the book. The Doctor is mentioned, described as 'the Evil Renegade,' according to Cwej a sinister character who kidnaps people and makes them think they are having wonderful adventures. We also get the Time Lords, Rassilon and even the Daleks without any copyrighted names being mentioned. The clever nameless references work really well and show just how shallow a lot of the continuity referencing in some Doctor Who novels can be.

Nevertheless, this is very much a Doctorless novel. Even the darkest of Doctor Who novels still have the reassuring presence of the Doctor. Dead Romance does not. There is no Doctor to rescue everybody here. We are told right from the start that the world is going to come to an end and it does. This is a dark, bleak novel pervaded with an overall mood of pessimism. Dead Romance presents an hopeless, chaotic and futile cosmos. This is a quite different mood to what we generally get in Doctor Who.

The story is told through a first-person narrative. Cleverly, this an unreliable narrator. In a postmodern spirit, we are never quite sure how much of the cosmic picture she has grasped. She is also clearly baffled by all the alien technology she encounters and so describes it in magical terms like 'potions.' This is a refreshing change from the technobabble you get in so much Doctor Who.

The narrator, Christine Summerfield (not an ancestor or in any way a blood relative to Benny) is a typical Lawrence Miles character, a cynical drug addict with very loose morals. I find her very likable. She is a down to Earth person who is easy to identify with. I much prefer her to Bernice Summerfield. Despite my adoration of the Virgin NAs, I absolutely hate Benny. She is far too overconfident and self-righteous. Christine is a much more believable character. Cwej comes across quite differently to how he appears in other novels. Part of the tragedy of the book is seeing just how corrupted he has become. The lack of redemption for him shows just how far this is from the happy humanism of Doctor Who.

Like every other Lawrence Miles book, the plot rambles a bit. There is a bit red herring half way through. There is also a massive twist in Dead Romance towards the end. I won't give it away, but it totally changes your perspective on the story and it makes the whole thing seem even more dark than it was up to that point.

I really appreciated the lack of action in the book. It is very much a work of reflection. It is all about exactly what is going through the mind of the protagonist and narrator. In fact, the only time in the book that she does something heroic, there is an apology!

The Time Lords are brilliantly portrayed. We never meet a flesh and blood Time Lord in the book, and this distance helps to keep them god-like and ethereal. They appear utterly cold and ruthless. They are simply beyond caring about the lives of human beings. Their obsession with altering the bodies of their subjects and employees is a new idea. I suppose the Rani must have learned her tricks on Gallifrey.

Dead Romance shares some common themes with the works of H.P. Lovecraft, as well as the sense of doom and cosmic pessimism. However, it stands above pretty much everything which is consciously written in the vein of Lovecraft. Seeing Miles manage to use the very same ideas as Lovecraft, yet avoiding the cliches of his imitators made me realise just how bad and pointless most Mythos fiction is.

Dead Romance is simply the cleverest and best written book ever to be associated with Doctor Who. It's absolute literary perfection.
Posted by Matthew Celestine at 05:55