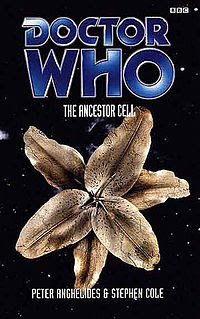 "Romana gave an apologetic little cough, and dangled her shoes on the tips of her outstretched toes. She was studying the tattoo on her bare ankle as though it were the most fascinating thing in the whole room."

As this book concludes a story arc begun by Lawrence Miles, I recommend reading his review of this novel before reading mine. Be warned, he does use some strong language.

As an individual novel, I have read many that are much poorer in style and which are much less interesting to read. Nevertheless, The Ancestor Cell cannot simply be treated as an individual novel. Not only does it conclude a story arc, but it introduces a massive change to the Doctor Who universe within the BBC novel line, namely the apparent destruction of Gallifrey.

It has been suggested by some fans that the War in Heaven was such a big whopping story arc that any resolution to it would have been disappointing. My question to those fans would be whether the War arc really needed resolving at all. Obviously, the character arc of Compassion needed to be resolved, but ironically, The Ancestor Cell actually fails to do that. Given that the war between the Time Lords and the unknown Enemy takes place in the Doctor's future, why not just leave the whole thing hanging in the air? If we go back to the Seventh Doctor era, one of the great things about the "Cartmel Masterplan" was that it was not actually a masterplan at all, but just a lot of hints and ideas that were never developed fully enough to cause any massive continuity problems. That all changed when Virgin allowed Marc Platt to turn the "Masterplan" into a real live story arc in Lungbarrow and come up with a disappointing and uninteresting backstory for the Doctor. To my mind, the real mistake of BBC editors was to take the delightfully imaginative elements in Alien Bodies and turn them into a big narrative arc. What would have worked far better would have been to follow the lead of Cartmel and occasionally drop in some hints about what was going to happen in the future war of the Time Lords.

The clumsy solution to the whole War arc is simple. The Doctor pulls a lever and blows up Gallifrey. No Gallifrey, no future war. It seems hard to imagine the Doctor actually doing this, however troubled he may be about the war. Of course, by altering future history this way, he is in fact creating a temporal paradox. Given all the trouble he has had with Faction Paradox re-writing his past, it seems bonkers that he would do this.

Faction Paradox are murdered by this story. In Alien Bodies, they were a seductive cult with a real sense of fun. In Ancestor Cell, they are turned into a bunch of shambling grotesques who nobody would dream of joining. Moving away from cultish or criminal activities, they become a standard set of Doctor Who bad guys and carry out a military invasion of Gallifrey.

The book offers us a half-hearted attempt to reveal the identity of the Enemy. It is suggested in a massive info-dump, that the Enemy are some of weird life form that would have come to dominate the universe had it not been for the Time Lords. This is a massively disappointing idea. Of course, this is not necessarily gospel, as it is a bad guy who claims all this and he could just be wrong. Lawrence Miles tells us this is definitely not his idea of who they are.

The Ancestor Cell gives us a glimpse of a Time Lord society that is utterly corrupt and devious. We already knew the Time Lords were like that. Lawrence Miles moved us on from that idea by combining the Holmsian model of the Time Lords as Machiavellian schemers with the original idea of the Time Lords as gods or elemental forces. The Ancestor Cell ends up making the Time Lords mundane again by populating Gallifrey with bored rich kids and starving homeless people. One thing that really damages the believability of this book is the idea that Castellan Vorzati would suffer prejudice because of a youthful looking regeneration. The Time Lords must have seen countless examples of regeneration to a more youthful body. It is absurd that they should so take appearances into account.

As I said, the one part of the arc that needed resolution was Compassion. At the end of this novel, she makes her escape, taking a Gallifreyan technician as captive. For most of the book, however, she is written out of the action. This is one of the most disappointing things in the BBC books. They gave us a really interesting character and then allowed lame, unimaginative writers to just ignore her.

Romana III, introduced in Shadows of Avalon, is one of the few entertaining elements in this story. She is the campest and bitchiest of camp bitchy characters. Her approach to carpet care is odd though. She complains about characters shuffling about on her carpet, but she walks about on it with high heels. If she really wanted to look after her carpet, she would take off the stiletto heels and ask everybody to remove their shoes. But then science fiction writers never think about that sort of thing.
Posted by Matthew Celestine at 05:37