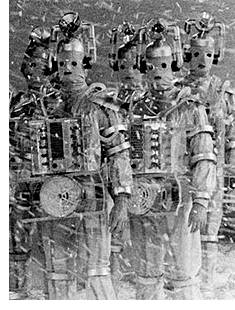 "Have you no emotions, sir?"

We can be very thankful that only one episode of this is lost from the archives, particularly given the wholesale decimation of the rest of this season and the next.

The Tenth Planet is a real turning point in the history of the show. Not only does it feature the first regeneration of the Doctor and the first appearance of the Cybermen, but it is also the first in a long series of 'base under siege' stories. Unless we count The Sensorites, it is in fact the first 'base under siege' story. Having seen so many of such stories, the fan watching this for the first time might well feel a sense of deja vu that would be quite different from the experience of the original viewers.

We can well imagine that the original audience would be baffled by the transformation of the Doctor in the final episode. The departure of Hartnell was inevitable given his ill health. In this final story he remains inactive for nearly the whole story. It is therefore left to Ben to take on the proactive role in this story (while Polly is shockingly left to make coffee). Yet despite Ben's activity, the TARDIS crew play little role in directing the course of events. As with an historical, they are left as bystanders and witnesses to inevitable events. This makes for a rather odd narrative, but not an uninteresting one.

Michael gives a pretty decent performance as Ben. The character he plays is a bit of a cliche, but in this he carries it off well. Anneke Wills is also great as Polly, defying the Cybermen. The guest cast are all very cliched and not very noteworthy. We get to hear some typically unimpressive American accents.

Few will deny that the strongest part of The Tenth Planet is the Cybermen. Their first design is remarkably different to later appearances, with the cloth face mask and the distinctive voices. While I like the later designs, I love the fact that these early Cybermen seem so human. They are not at all robot-like. Ben even feels remorse when he is forced to kill one of them. They seem rather more individual than the Troughton-era Cybermen, who often came across as mindless zombies.

The whole business with a moving planet is rather bizarre and just a little unbelievable, but never mind. Finally, I think it's so charming that the First Doctor addresses a Cyberman as 'sir.'
Posted by Matthew Celestine at 10:01