The Keeper of Traken 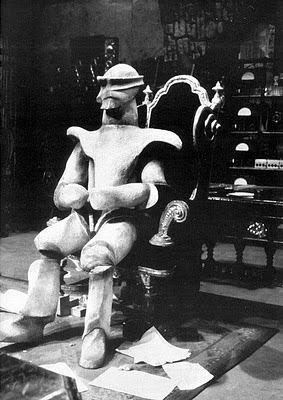 "They say the atmosphere there was so full of goodness that evil just shrivelled up and died."

I love the way the JNT era blends hard science with mysticism. While you get a certain amount of Star Trekky science stuff in this story, you also get a whole bag of spiritual ideas. Not only is there the idea of a fantasy world where evil is supernaturally eradicated, but there is the medieval idea of sacral monarchy where the king somehow maintains the harmony of the balance of nature, a kind of musical arrangement of the cosmos by an hierarchy of celestial powers, along with the Hellenistic idea of prime numbers being the source of power in the universe and everything that goes with the mythology of gardens. It is quite remarkable the way that Doctor Who in the early 80s expounded a pre-modern cosmology. As a Christian I can totally identify with the worldview elaborated in The Keeper of Traken. The epistle to the Hebrews in the New Testament says:

1 God, who at sundry times and in divers manners spake in time past unto the fathers by the prophets,

2 Hath in these last days spoken unto us by his Son, whom he hath appointed heir of all things, by whom also he made the worlds;

3 Who being the brightness of his glory, and the express image of his person, and upholding all things by the word of his power, when he had by himself purged our sins, sat down on the right hand of the Majesty on high

The idea in this serial of a guy on a throne upholding cosmic harmony seems remarkably familiar.

The Platonism of The Keeper of Traken also reminds one of the Chronicles of Narnia by C.S. Lewis. This is appropriate because the BBC adaptation of the Narnia books was the last gasp of that genre that was dying in my childhood; the children's fantasy drama. The Keeper of Traken is remarkably reminiscent of such fairy tale style offerings. A lot of those dramas were studio bound like this one and had the same escapist feel. A lot of viewers complain about the obviously studio bound nature of The Keeper of Traken, but I think the well designed sets fit the style of the story rather effectively.

Doctor Who often succeeds best when it manages to create a world that we can believe is real. The Keeper of Traken is one of those few stories, like Snakedance and The Ribos Operation, that manages to do this. The title helps; it at once creates a sense of history. Even more importantly, when it comes to world-building, it's the little details that count. For instance, one of the things that makes Snakedance authentic is the presence of a puppet show for children. Likewise, the production of The Keeper of Traken thinks about the small things too. Young and old wear different clothes; young Kassia and Nyssa wear similar outfits. Most significantly, we have a wedding in the first episode. How often do we see a wedding on an alien planet in Doctor Who? Furthermore, all of the characters are fleshed out fairly well and given plausible motives. The narration of the history of the Melkur by the Keeper at the beginning is really effective and thus removes the need for clumsy exposition.

Dr. Who monsters invariably suffer the same problem in that no matter how good they look, the actors cannot move them properly. The ideal monster would avoid this clumsiness by not moving very much at all. This is why the Melkur is effective- he is a creepy living statue. The idea was such a good one that the BBC Wales series adopted it to great effect with their Weeping Angels. It might have been nice to have seen other calcified evil beings. A garden full of evil statues or petrified monsters would have looked so cool. I suppose their budget did not go that far.

As with many fairy tales, there is a wicked stepmother. In this case it is Kassia, who is not really wicked, but has a warped and twisted desire to protect her husband. She is a really effective character and is ably played. The scene of her as a girl greeting the Melkur is one of the most effective scenes in the story, not only in setting up her character and relation to the Melkur, but in showing the world of Traken.

This story sees the first appearance of Anthony Ainley, for most of the story as Tremas and finally as the Master. He does a great job and gives a performance that is much better than some of his later appearances. On the whole, the other cast members are very good and there is no bad acting anywhere in this serial.

We also see Sarah Sutton's Nyssa for the first time. Nyssa was always a boring character who was never really developed. She is pretty good in this story, especially the way she stands up to her 'wicked stepmother.' The question does remain as to exactly why she was made a companion in what would become a rather overcrowded TARDIS.

Tom Baker puts in a performance that is both brilliant and different to his other acting styles, even in the same season. In The Keeper of Traken, as with other stories in this season, he is acting instead of being a stand-up comic, yet he lacks the moroseness that can be seen in other Season 18 stories, particularly the next one. He seems really relaxed and getting into the spirit of this story. It comes across as so very naturalistic. More controversially, Adric comes across really well here. Perhaps he is at his most likable in The Keeper of Traken. He has such a great rapport with Tom Baker.

The Keeper of Traken challenges it's own premises. We are told that the people of Traken are always 'being nice to each other,' but we actually don't see that much of it. The Trakenites actually come across as remarkably hostile and suspicious. What is more it seems unlikely that Neman is the only person in this society who is hopelessly corrupt. We learn in this story that the best of societies have their hidden flaws and can so easily descend into tyranny.

The Keeper of Traken may not feature in many fans' lists of the best stories, but it is a true classic and a John Nathan-Turner production that has as much substance as it has style.
Posted by Matthew Celestine at 09:59