The Architects of History, by Steve Lyons (Big Finish Audio) 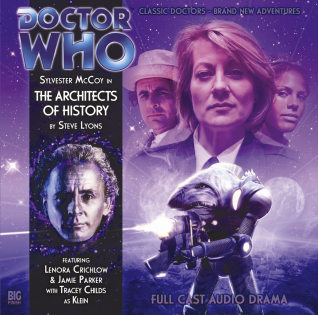 Elizabeth Klein comes close to her goal of creating an eternal Reich, but her work is interrupted by the invasion of the Selachians.

Author Steve Lyons (who gave us the magnificent NA Conundrum) states "I'm not keen on alternate timeline stories because there's always a reset switch looming at the end of them, but perhaps, just perhaps, there was a way..." Unfortunately, there was not and we end up getting a big reset switch at the end. I suppose given this trilogy began with a survivor of a lost timeline, the trilogy was bound to end up with a mess of alternate timelines at the climax.

As much as I have enjoyed the Klein trilogy, I am not at all happy with the notion that history can be mucked about with so easily in the Whoniverse. I know things have moved on since Season 1 and it is undeniable that history can sometime be altered, but I think there are good reasons for thinking that history in Doctor Who is at least normally immutable. Nevertheless, it's been fun and it has been great to enjoy Tracey Child's glorious performance as Elizabeth Klein.

I think it's fair to say that The Architects of History is the weakest of the Klein trilogy. We get no explanation as to how the Doctor passed from the end of Survival of the Fittest to his present circumstances as a prisoner of Klein in this story. The ending is also utterly baffling. The Doctor persuades Klein to execute herself by removing herself from the timeline. The Doctor assumes that this will allow time to unravel itself. This makes no sense. Surely it would unwrite Klein's part in Colditz and thus allow the timeline with the Nazi victory in the Second World War to prevail? Even more baffling, Klein is not really removed from the timestream and we get a nice un-Nazi Klein at the end who is working for UNIT.

Despite the radical nature of this story, it relies on that old Doctor Who format of the 'base under siege.' In this case, the alien monster invading the moonbase are the Selachians, a shark-like race introduced in the BBC novels. The Selachians are more interesting than other monsters on a physical level (they are fish wearing water-filled armour), but their behaviour is the same as Daleks, Sontarans, Kraals and other assorted Returning Monsters.

The Doctor in this story is the dark Doctor of the New Adventures who manipulates everybody and does some rather questionable stuff. This is the Doctor I love, but if you hate the New Adventures, it is safe to say that you will hate this story. The grim and downbeat climax is certainly very NAish.

Leonora Crichlow puts in a great performance as a companion of the Doctor in an alternate timeline who is lost with this one. There is a real tragedy in that not only is her coming to exist jeopardised with the termination of this timeline, but she may exist but never meet the Doctor and experience the things he has shown her. However, her romance with a moonbase crew member is a bit irritating.

The musical score is dramatic and very strong. It is included as a music track at the end (I like it when Big Finish audios do that). The CD insert also features some great artwork. It's nice when Big Finish go to the trouble of making a really good package.

It would be nice to see more of Klein. It's been so wonderful to have an attractive, elegant and mature companion in the TARDIS. I know we have an older companion in Evelyn Smythe, but Klein is a lot more glamorous. There is a gap between A Thousand Tiny Wings and Survival of the Fittest, so future audios or novels could explore Klein's travels with the Doctor. Alternatively, we could have some adventures with the un-Nazi Klein who works for UNIT, though she is probably a less interesting character.

I want to thank Big Finish for the fun I have had with the Klein trilogy. It was a really dynamic and imaginative story arc. Of the three dramas, the first one, A Thousand Tiny Wings was the best, but the other two are well worth buying.
Posted by Matthew Celestine at 05:26