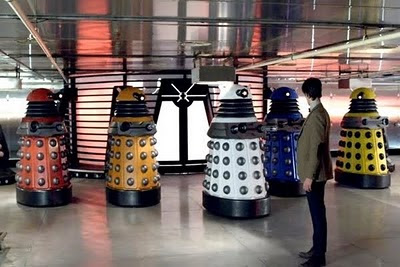 A recent visitor to this blog suggested that I am a bit too negative about the BBC Wales series. Well, I am going to surprise everybody by offering some faint praise to the New Dalek Paradigm designs in the last season. I would venture to say that they are one of the few decent things in the last Dr. Who season.

I don't think they are perfect. They are a bit too large. I think the small size of the Daleks in The Daleks reflected their freakiness better than the bigger versions we have seen since The Dalek Invasion of Earth. 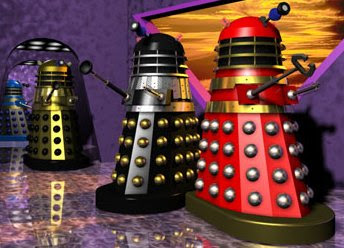 Part of the appeal of the new Daleks is the obvious homage to the Daleks in the Cushing movie. Those films might not have been Doctor Who, but those Daleks were cool. The other more obscure influence is of course the Marx Dalek toys that were sold in all good toyshops back in the 60s. Such was the nostalgic appeal of the Marx toys that you could buy remakes of them by Dapol back in the 90s wilderness years. I had one myself. I suppose my liking for this ridiculous Sixties design betrays me as being hopelessly nostalgic. But how can one separate a liking for the Daleks from nostalgia? 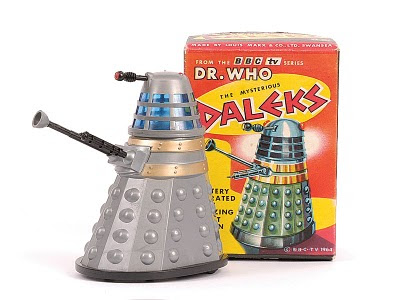 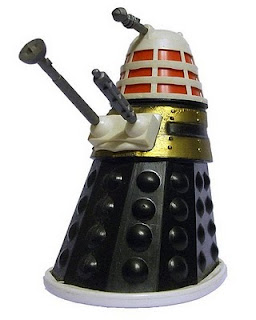 Part of the appeal of Daleks is that they are both silly and frightening at the same time. Nobody working in science fiction television today would come up with a design like the Daleks. Yet they have lasted for nearly fifty years. The RT Davies brass Daleks went a long way to restoring the terror and violence of the Daleks, but aside from the flying saucers, allowed them to lose a little of their Sixties kitsch. With their bright and bold colours, the new Dalek paradigm are full of it. They look like vacuum cleaners or fire extinguishers. Nevertheless, we can be sure that when they start exterminating people they will chill the blood as ever.

Having been utterly disappointed by the dreadful Christmas special and the absurd season 5 finale, The Big Bang, I can only hope that in the next season we will see an all-action Dalek adventure with the fab new Daleks.
Posted by Matthew Celestine at 03:07