Time and the Rani 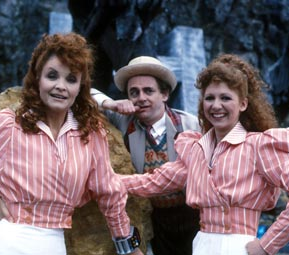 Being a massive fan of Sylvester McCoy I desperately want to give this a positive review and find lots of redeeming features. I must admit, I find that practically impossible. I do think there are far worse stories (Time Flight, Colony in Space, The Mutants, etc) and it is reasonably fun to watch, but Time and the Rani is is undeniably naff.

The biggest problem is McCoy himself. McCoy went on to give us some great performances, but in his first serial he really is at sea. He simply has no idea how to play this role and ends up being an absurd clownish figure. It is unfair to blame the guy; the director probably had no idea, and writers Pip and Jane Baker are equally perplexed, having previously written for Colin Baker. Andrew Cartmel had only just taken over as script editor and would take time to formulate his vision of how the Seventh Doctor should be.

We can't let the director and writers off the hook though. This story is a frantic mess. All of the characters are rushing around like headless chickens. Worse still, they are given absolutely horrendous dialogue that nobody could imaginably say in real life. Pip and Jane Baker come across as such lovely people, but they really could not do natural sounding dialogue.

Sadly, we are denied a proper regeneration for the Sixth Doctor, as Colin Baker refused to return for this episode. I don't blame him at all after he was so horribly treated by the BBC.

The story is not without a few redeeming features though:

1. The Rani disguising herself as Mel

I can't believe so many fans hate this bit. It has me in stitches watching the Rani in her Mel outfit! Kate O'Mara captures not only Bonnie Langford's voice but the way she walks too.

It is just such an unusual scene. Even the Master, that Master of disguise never tried pretending to be the Brigadier, as fun as that would have been. Back in the more serious Saward era, the Rani would have had some holographic device to change her appearance and Bonnie Langford would have played the Rani in disguise. Here we get something much more fun.

She might have some awful lines to say, but she says them with style. She is so hilariously butch. Her new nose stud is cool too.

The Tetraps are such a great looking monster. The Lakertyans also have good costumes, even if they are a bit pathetic. The Rani's castle is very well designed.

It's nice to see the Rani outwitted by her own minions and the writers sensibly avoid killing her off, thus allowing a return appearance that would never happen.

5. The new costume for the Seventh Doctor 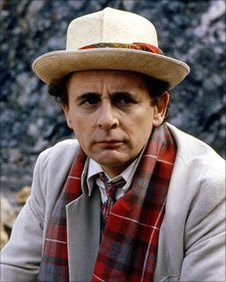 This is something the story really gets right! This is in my opinion the best Doctor's costume in the history of the show. For once the Doctor no longer looks like he is going to a fancy dress party. He wears something that looks modern and stylish. Their is an eccentricity to the costume, but it is the eccentricity of a trendy academic, rather than some weirdo who wants to imagine he is living in the Edwardian era. The two-tone shoes are a particularly stylish touch. The Seventh Doctor has a real sense of cool. All he lacks is the paisley scarf that he would get for the next story.
Posted by Matthew Celestine at 06:18