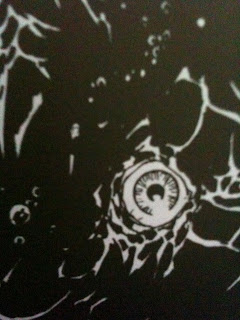 My favorite Doctor Who monsters!

"Its body resembled a huge serpent, with spikes and billowing dragon-like wings. Its reptilian head was lean, with dozens of eyes square in the forehead, savage teeth, long, languid tongue and small horns bulging from the crown.

As she stared, the Beast seemed to take on many forms. Glimpses. Was it one monster or a myriad? She thought she could see painted wings, like a deaths-head moth, claws, wet feathers. Perhaps there were smaller creatures clinging to the main body, or maybe flying things hovering around the Beast. Whatever the Beast was, it rose up above the machinery, through the hole in the roof and hundreds of metres into the heavens."


The Yssgaroth first appeared in the Virgin New Adventure novel, The Pit by Neil Penswick. This is a very poorly regarded Doctor Who novel, but it is appreciated by fans who enjoy exploring some of the more Lovecraftian elements in Doctor Who.

We learn in The Pit that the Yssgaroth are monstrous beings from another universe. The Yssgaroth were introduced into our universe eons ago by Rassilon and his fellow Gallifreyans. Rassilon experimented with black holes in order to achieve time travel. This tore open the fabric of space and allowed the Yssgaroth to enter.

The Time Lords then fought a terrible war, known as the Eternal War against the Yssgaroth. Apparently, none of those who fought survived. The Gallifreyan General Liall a Mahajetsu was believed to be killed, however, he survived and waited through long millennia to guard against the return of the Yssgaroth. The Time Lords were clearly embarrassed by this event and erased it from their records of the Dark Times. The Yssgaroth were remembered on Gallifrey only in tales told to frighten children. The universe was ravaged and many planets were devastated by the extra-dimensional invaders. Stories about these horrific beings entered into the mythology of many cultures. The Yssgaroth were regarded by some races as the 'Elder Gods.' Through the ages, various nihilistic cults worshipped them and performed gruesome sacrificial rituals to them.

The Doctor described the Yssgaroth as 'nameless, formless horrors.' They do not appear to have any definite form and shape. As they come from another universe, they are probably constructed of a very different kind of matter and substance. When the Yssgaroth first appear in the novel; it takes the form of a lamb on a throne, an obvious allusion to Christ in the book of revelation. It then transforms into a terrifying winged and horned serpent with multiple eyes. The Yssgaroth are forces of chaos, misery and death. They are utterly antithetical to life and if they were given free reign in this universe would utterly destroy it. The Yssgaroth have captured and enslaved countless beings in this universe and brought them to their own hellish realm. These enslaved beings exist in eternal torment; denied the release of death.

Are the Yssgaroth the same as the Great Vampires? Neil Penswick used the word 'vampires' in The Pit, without clarifying whether these are the same kind. The background to the Great Vampires in the Season 18 serial State of Decay is obviously similar to the Yssgaroth. The Great Vampires apparently came from nowhere during the Dark Times of Gallifrey. They swarmed across the cosmos, spreading their evil to many worlds. They were defeated by the Gallifreyans and their menace was stopped. The record of the war with the vampires was erased and only survived in stories like the ones that were told to the young Doctor.

There are some clear differences between the Yssgaroth and the Great Vampires, however. The Great Vampires have a definite form and shape and are made of like matter to living beings. The Yssgaroth are formless, ethereal beings of a more spiritual nature. The Great Vampires can be destroyed by piercing their hearts with a bolt of steel. It is hard to imagine the chaotic entities that Penswick describes being so easily described. It also appears that Rassilon took a more active role in the conflict with the vampires than he had in the Eternal War against the Yssgaroth. This could be propoganda on the part of Rassilon, his morality seems ambivalent enough to try to steal the glory from Liall a Mahajetsu. On the other hand, if the vampires are a slightly different order of beings, then it could be that the war with the vampires is a second stage of the Eternal War.

I would suggest that the Great Vampires are Yssgaroth that have adapted to exist in our universe. They have a physical form that enables them to remain in this universe and to produce vampiric offspring from the species of our universe. This comes with the downside of making them vulnerable to weapons such as Rassilon's bowships.


The Yssgaroth are one of the few elements of the Whoniverse that have been retained in Lawrence Miles Faction Paradox spin-off without a change of name. The Book of the War, an encyclopedia of the War in Heaven, fought between the Time Lords and an unknown Enemy, contains many references to the Yssgaroth. The Eternal War against the Yssgaroth was the first and original War in Heaven. The Time Lords had never been engaged in war between this conflict and the conflict with the Enemy.

According to The Book of the War, the Yssgaroth represent a primal bestial chaos:

"One of the Yssgaroth (if, indeed, there is more than one) would, fully unleashed, be capable of turning an entire world into a playground of casual torture. Nor did the Yssgaroth seem to have any ambition beyond this, or any desires more complex than the generation of pain and the glorification of despair."

The Yssgaroth turned many worlds into 'laboratories of cruelty' where the inhabitants were subjected to unimaginable torment. These worlds were thought to have been retro-annulled by the Time Lords.

The Book of the War ties the Yssgaroth to the vampires through the Mal'akh. These are hybrid offspring of the Yssgaroth and the species of this universe. These are identified with the story of angels mating with humans in the Old Testament and the apocryphal Book of Enoch.


The Yssgaroth show the clear influence of H.P. Lovecraft, who populated his stories with similar intangible, conceptual horrors. As mentioned above, the appearance of the Yssgaroth as an enthroned lamb is a reference to Christ in the book of Revelation. The multitude of eyes that the Yssgaroth posses may also be an allusion to descriptions of heavenly beings in the Bible. A number of mythologies make reference to winged serpents and dragons.

The reason I love the Yssgaroth as a Doctor Who monster is because they reflect my own worldview as Bible-believing Christian. I believe that there was a primordial conflict before this present creation between forces of chaos and the Lord. The Old Testament uses the serpentine Leviathan as a symbol of the chaos before creation and the evil that will be defeated by Yahweh in the future. The Book of Revelation takes on this imagery and presents Satan as a dragon or sea monster. I believe that there is an age-long struggle being fought between God and His angels and evil spiritual beings in heaven. These things in Doctor Who may be fiction, but they are not far from the truth.
Posted by Matthew Celestine at 07:49