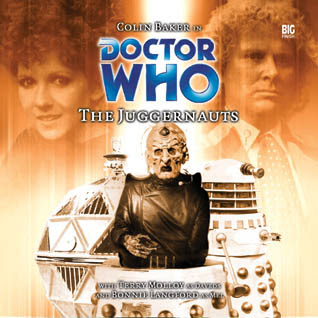 Davros is messing about with Mechanoids. The Sixth Doctor and Mel put a stop to it.

This is a bit of a shopping list story. It's got Davros, the Mechanoids and the Daleks all thrown together in that way that fans of returning monsters (in other words Doctor Who fans in general) love. The Juggernauts joins some of the continuity dots between Revelation of the Daleks and Remembrance of the Daleks, though whether this is necessary is another question. Being a fan of the more experimental Virgin New Adventures, I can't help thinking that Doctor Who audio ought to be capable of a bit more than this kind of traditionalist fare, but it's still fun.

The plot is not the best, but it gets us along at a reasonable pace. Obviously, having Daleks and Mechanoids in, we are going to get a lot of fighting and this works surprisingly well in the audio format. Naturally, the Mechanoids are the main selling point of this audio. Nicholas Briggs does a fantastic job of recreating the sound of their voices. It's nice to encounter them again. On the other hand, the idea that these new Mechanoids contain human body parts just comes across as stupid. Surely if they were efficient enough before without human body parts they could be equally efficient as pure machines in their rebuilt state? It seems like the writer is trying to throw in too many new ideas. Likewise, it seems odd that the Davros is suddenly so anxious to destroy his Dalek creations. He has never shown this ambition before.

Terry Molloy puts in a good performance as Davros and we get some insights into his psychology. Colin Baker also shines and delights in being arrogant and bombastic again. However, the real star of this story is Bonnie Langford. She is amazing in this story, showing real depth and grabbing the role of heroine by the throat. This Mel is tough and indomitable. As the Doctor says "hell hath no fury like a Mel scorned." Of course, she does not seem at all like the character we saw in seasons 23 and 24. She is a little more like the Mel in Craig Hinton's novels.

The Juggernauts is a fun and well produced audio drama that is worth a listen. I enjoyed it, though a part of me feels like Big Finish could do some much more interesting stuff than this.
Posted by Matthew Celestine at 06:29