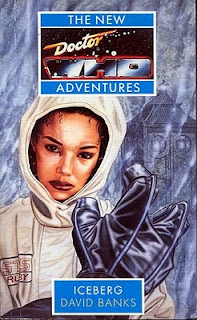 The Cybermen cause more trouble in Antarctica.

As we all know, David Banks played the Cyberleader in 80s Doctor Who and put a great deal of enthusiasm into the part. He also wrote a thick book on the history of the Cybermen, which I really enjoyed when I was ten years old. I loved the Cybermen.

As you can imagine, Iceberg spends a good deal of time dealing with various continuity issues relating to the Cybermen. Some fans hate that sort of thing, but I think it is fine so long as it does not distract from the story. We learn that not all Cybermen are affected by gold, which makes sense, as the Sixties Cybermen had enough other weaknesses of their own.

The second chapter gives us a nice snapshot of everyday life during the events of The Invasion. This does help to set the stage for the rest of the novel. David Banks would seem to take a similar view of UNIT dating to me; he has a punk walk down the street, which means that The Invasion must take place close to 1979 and thus support an 80s setting for the later UNIT stories.

The story takes place during the Doctor's separation from Ace and Bernice during Birthright. Thus, we do not see either of them. The role of companion is taken over by Ruby Duvall, a journalist. She is quite a likable character. Banks also gives us a General Pamela Cutler, daughter of the General Cutler in The Tenth Planet. Disappointingly, she does not have that much of a role in the plot.

It takes rather a long time to get into the action. Iceberg could have done with a much faster pace. David Banks' prose writing is not bad, but it is hardly the best among the NA writers. As with John Peel in Timewyrm: Genesys, David Banks portrays a Seventh Doctor who is closer to the Season 24 version than the Darker Doctor that we have seen in the other New Adventures.

We get a very graphic and disturbing description of the process of converting people into Cybermen. I am not sure that we really needed to know that people converted into Cybermen have their sexual organs removed. Some things are best left to the imagination.

The book abounds with references to The Wizard of Oz. This would probably have worked very well had we not had one Dorothy Gale in the TARDIS. The Oz thing feels a little overdone, even six years after Dragonfire.
Posted by Matthew Celestine at 08:19