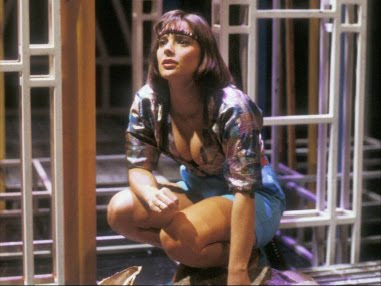 It was certainly a mistake to introduce the Sixth Doctor at the end of the previous season instead of opening with his first story. It is just one of the many ways in which he was set up to fail, not least among them the hideous costume he was given.

After the grey darkness of the previous season, Season 22 has something of a more colourful look. For the most part, this is not accompanied by a more light-hearted tone. Season 22 is unrelentingly violent and full of some quite vicious characters. To my mind, the crushing of Lytton's hands in Attack of the Cybermen represents the heights of excessive violence in Doctor Who. Production values in this season are a mixed bag, with some great location work and a few good sets, but also some uninspired acting in some stories. The quality of script writing is rather underwhelming in Season 22.

There does seem to have been a genuine desire to challenge viewers and offer a fresh approach to Doctor Who, but it was too half-hearted. For all the attempt to make the Doctor scary and less clean-cut, like he had been in the Hartnell years, he was still presented as a nice guy deep down. The McCoy years would later succeed in making the Doctor seem genuinely scary and dangerous. The over reliance on past continuity, inherited from the previous seasons would also serve as a barrier to offering a fresh approach.

As with the previous season, there is a strong thematic connection between the serials of this season. There is an emphasis on consumption, lust and the body. Attack of the Cybermen has the Cybermen consuming human bodies, Vengeance on Varos has colonists who consume images of torture, Mark of the Rani has the Rani using human bodies as a source of chemicals and, of course, turning people into trees. The Two Doctors is all about eating the flesh of humans and aliens. Timelash has the Borad wanting to posses and change Peri's body. Revelation of the Daleks is about bodies being turned into food and also into Daleks. With some better writers, these scripts could have considerably enhanced the depth and strength of the stories.

Through it all, Colin Baker gave some pretty decent performances. As both the Doctor and as a real person he is very likable, but he was simply not given material that enabled him to shine. Nicola Bryant was also disadvantaged by being paired with a character with whom her character would inevitably clash. It can be fun watching the Sixth Doctor and Peri bicker, but through the whole season it became just a bit too much.

Too much obsession with continuity, too much violence and shockingly weak Cybermen.

The makings of a great story, let down by lazy and careless script writing.

Why did they have to bring back the Master?

A very postmodern story that deconstructs our idea of the way the Doctor operates.

Revelation of the Daleks 9/10

Brilliantly directed with a great set of characters, but the Doctor is completely irrelevant to the plot.
Posted by Matthew Celestine at 01:29