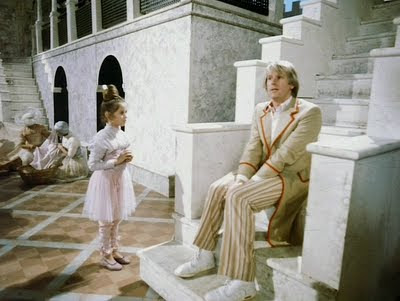 The Doctor regenerates for the fourth time and the Master has yet another bizarre and dastardly plot (yawn).

A post-regeneration story is vitally important in that it establishes the way in which viewers perceive the new Doctor. Get it wrong and you have problems. Things went wrong with the Sixth Doctor in The Twin Dilemma. We were shown a Doctor who was acting like an homicidal maniac, who actually attempted to throttle his own companion. This coloured our perceptions of this Doctor as a violent lunatic. Things also went wrong in Time and the Rani. In his maiden story, the Seventh Doctor came across as a bumbling clown in a rushed and clumsy story. No matter how brilliant McCoy's later performances, viewers never warmed to him. Contrast this with Power of the Daleks, where the Second Doctor acted a bit oddly, but immediately rushed into action, impersonating the the Examiner on Vulcan. Or Spearhead From Space, where the Third Doctor escapes his hospital bed and steals a motorcar Mr. Toad style. Or Robot, where the Fourth Doctor combines acting like a lunatic with being a very effective advisor to UNIT.

Castrovalva unfortunately sets the viewer up with a rather poor image of the Fifth Doctor. We spend the story watching a Doctor who is weak and helpless, confused and acting really bizarre. He needs to be educated by a child and gets carried by two women in a sort of pram. He only just manages to recover at the climax. The viewer is thus set up to see the Davison Doctor as vulnerable, ineffective and generally a bit wet.

We also have a good deal of time spent in the TARDIS. Too long in my opinion. We have seen enough of the TARDIS in previous stories for it to be a fairly familiar location. The extended TARDIS scenes are just a bit boring.

That is not to say there is nothing good about Castrovalva. The set design of Castrovalva is incredible, and the location work is also pretty good. John Nathan-Turner succeeded marvellously in restoring decent production values in the show. It is just unfortunate that a few of stories tend more towards style than substance. Castrovalva sadly comes into that category.
Posted by Matthew Celestine at 02:48