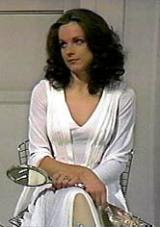 Season 16 is one of my favorite seasons of Doctor Who. Fans have mixed opinions about it, but it is definitely better regarded than the other two Graham Williams' seasons.

Season 16 is distinctive in that each serial is united by the overarching theme of the quest to recover the cosmic 'Key to Time,' a quest that the Doctor is sent on by the god-like White Guardian. He is opposed in this by the Black Guardian, who does not appear until the last episode. Oddly, this story arc is the weakest element in Season 16 and is a demonstrative example of how Doctor Who is not good at story arcs. The six serials vary enormously in the importance they attach to the quest for the Key. Androids of Tara hilariously sends up the whole idea, with the Doctor preferring to go fishing and leaving it to Romana to locate the Key within the first few minutes of the story. At the conclusion of the season, it is quite unclear how the finding of the Key to Time was significant, as the Doctor has its components scattered across the universe again. There are good reasons for thinking that the whole quest had actually been a set up by the Black Guardian. The current production team are in my judgment making a huge mistake in making story arcs so central to the show.

The Key to Time arc is actually a distraction from the real character of Season 16. In my opinion, this is one of the most adult seasons of Doctor Who. It places less importance on monsters and instead offers some really sophisticated scripts. The light-hearted tone offers some really comic moments. The other adult aspect of this season are the veiled references to sex; the 'certain kindnesses' in Androids of Tara and the very obvious lesbian subtext of Stones of Blood.

Although Season 16 is ostensibly about searching for an object that it is vital to the stability of the cosmos, the individual serials of this season are allowed to deal with more small scale themes. The Ribos Operation is about crooks and petty dictators, Androids of Tara is about feuding nobleman and Stones of Blood is about an escaped convict (who appears to just want to live a quiet life, eating sausage sandwiches with her lady friend). There is a distinct lack of alien invasions or machines that could tear a hole in the fabric of time and space. The current production team could really do with a story like Androids of Tara; a nicely produced adventure story without any grand cosmic proportions.

Season 16 saw the introduction of new companion Romana. In this season she was played by Mary Tamm, an attractive actress of Estonian extraction (I am told that she is famous in Estonia, and rightly so). Romana was a radically new kind of companion in that she was a Time Lord and therefore an equal to the Doctor. In this season, she had a delightfully frictitous relationship with him. Her upper class bearing made a great contrast with the Fourth Doctor's image as a sort of cosmic trade unionist. At times the Mary Tamm Romana showed some resemblance to Margo Leadbetter in The Good Life. Like her, Romana had a great flair for style and wore some quite eye catching outfits.

Mary Tamm was a much more talented actress than her successor to the role, Lalla Ward. However, there were occasional moments where one might doubt how seriously she was taking the role. Towards the end of her time on the show, she seems completely unenthusiastic about the part. The real problem was that the writers were not used to writing for a character like Romana and so fell back on the easy route of making her an old-fashioned damsel in distress. It was left to Lalla Ward to develop the character further in the next two seasons.

Unfortunately, K9 remained with the TARDIS crew this season and proved to be a continued to be an irritation and also a get-out-of-jail card for writers. He had been more tolerable with Leela, but placed with Romana, we had the irritation of three very clever people on board the TARDIS. This was a little too much.


The Ribos Operation 10/10- A brilliant story of double-dealing and small-time villainy with a script of almost Shakespearean wit. Ribos is a beautifully conceived world with a distinctive Muscovite look.

The Pirate Planet 7/10- Some great humour and wonderful performances, but let down by some poorly realised ideas.

The Stones of Blood 8/10- Despised by many fans, I adore this story. It's one of my favorites. The plot has many weak points, but I just love the way it subverts many of the conventions of Doctor Who. Romana looks ravishing in her Burberry cap!

The Androids of Tara 10/10- It's set on another planet and has androids, but it feels like an historical drama. A wonderful light-hearted adventure. There is no other Dr.Who story like it.

The Power of Kroll 4/10- When I reviewed this story on this blog, I tried to defend it. I don't bother any more. The more times I watch it, the more noticeable its faults become. Romana's potential is utterly wasted in this story.

Armageddon Factor 5/10- A very disappointing conclusion to a great season. There is some wonderful dialogue and brilliant performances, but Doctor Who has never looked so cheap. Lalla Ward first appears in the role, not of Romana, but as Princess Astra. She is not very impressive.
Posted by Matthew Celestine at 09:00