The Taking of Planet 5, by Simon Bucher-Jones and Mark Clapham (BBC Novel) 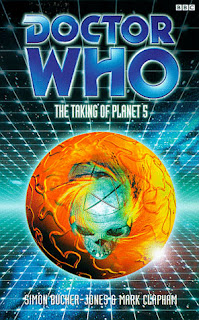 The creature was unlike everything. It required an effort of will to even look at it. It was a void, a chasm, an absence made visible, it was everything made nothing. Faced with it, the brain rushed to fill it with detail, any detail, a black world-devouring octopus, a spider with eyes the size of Mars, a crooked cube unfolding, a ruined city cluttered with insane memorabilia, a cartoon character with eye sockets crammed with worms. Phantom images projected by the tottering brain into the yawning absence of the creature.

To say that The Taking of Planet 5 looks to Lawrence Miles' Alien Bodies for inspiration is a serious understatement. Not only does it use the concepts introduced in Alien Bodies, but it also has such a similar style that it might almost have been written by the same author. Of course, Simon Bucher-Jones and Mark Clapham have not outdone the master of cosmic madness. The Taking of Planet 5 is not such a good novel as Alien Bodies, but it is still a worthy successor to it.

Like Lawrence Miles, the authors of this book place world-building before the story. While the novel is an important landmark in the development of the story arcs relating to the regular characters, the novel is less interesting for the story itself and more for the glimpse it offers into the depth and scope of the Doctor Who macrocosmos. As with Alien Bodies, there is an unsettling sense that weird and unexpected things are being done with the Doctor Who mythos.

This novel is remarkably similar to the much more traditionalist Quantum Archangel, by Craig Hinton. Both books are sequels to Seventies stories, but they also share the common interest of grounding their vast cosmologies in hard science. Simon Bucher-Jones and Mark Clapham take their science seriously (just like Lawrence Miles takes his British Cultural Studies seriously). The novel even has an appendix explaining its cosmology in scientific terms with references to real sources (as an Evangelical Christian I was pleased to spot a book by William Lane Craig among them).

The Taking of Planet 5 continues the War in Heaven story arc first introduced in Alien Bodies. This time we get to see a little more of it and a glimpse of just how much the future society of Gallifrey has been changed by the War. We also get the fascinating revelation that the Time Lords have perfected regeneration to such a level that they can take a non-hominid form; in this case Lovecraft's Elder Things, as described in At the Mountains of Madness. Faction Paradox only get a mention this time. The Celestis and their hellish realm o Mictalan apparently meet their end here. It is cool, but it is perhaps a sign that the BBC editors were wanting to eliminate the various concepts introduced by Miles. It is great to see the Time Lord, Homunculette again (why couldn't he make some more appearances?), though it would have been nice to see more of his Companion/ TARDIS Marie.

When I first read about the plot of this story, I was a bit disappointed. Having read the references to the various Great Old Ones in the New Adventures, I had hoped that nearly all the Lovecraft stuff could be true within the Doctor Who mythos. Here we find out that the Doctor is a personal friend of H.P. Lovecraft, both men sharing a mutual love of ice cream, and he knows full well that At the Mountains of Madness and its primordial entities are fictional. Nevertheless, the Doctor discovers that somehow they have become real. The Taking of Planet 5 is something of a tribute to Lovecraft. Like any Lovecraft story, there is a strong sense of lingering atmosphere and cosmic unease. I will confess I punched the air when Compassion came under the psychic influence of the fictional reality and spontaneously quoted Lovecraft:

"They were the mankind of their epoch. Scientists to the last. Radiates, vegetables, monstrosities, star-spawn- whatever they had been, they were men!"

The connection drawn between the Elder Things enslaving the Shoggoths and the Time Lords enslaving the TARDISes is an extremely clever and thoughtful use of the source material.

Appropriately, given the Lovecraftian theme, The Taking of Planet 5 is a sort of sequel to Image of the Fendahl. This is rather obvious from the cover picture. The Fendahl creature does not actually appear in the story. Instead, we get the Fendahl Predator, an even more horrifying eldritch entity. I can't help wondering if there is a slight pastiche intended in the idea of a being that feeds on a being that feeds on all life. The Fendahl Predator is a Memovore, a being from outside the universe that eats concepts. Simon Bucher-Jones contributed to Lawrence Miles' The Book of the War, in which Memovores were also featured. The Book of the War seemed to take a very Platonic metaphysic, with concepts having a very actual existence.

In my judgment, this is one of the best portrayals of the Eighth Doctor. Fitz is a simply glorious character; he is so down to earth. In The Taking of Planet 5, we also get a rare glimpse of Compassion's personality. Most of the BBC writers had no idea how to write Compassion, so they got into the bad habit of writing her out. Like Seven-Of-9 in Star Trek Voyager, it is her coldness and matter of factness that is so appealing. In this story we get some major clues about her identity. The scene where the three regulars discuss the identity of the Enemy is particularly fun. The Doctor concludes that in the end they will probably turn out to be just "Yartek, leader of the alien Voord with a big stick." His reference to Transformers and Saturday morning television is nice.

The Taking of Planet 5 is not especially well written. The plot is dense and a little hard to follow. A lot of the human characters are utterly uninteresting. Nevertheless, it is deeply enjoyable for its fascinating concepts and vivid cosmological themes.