The Power Of Kroll 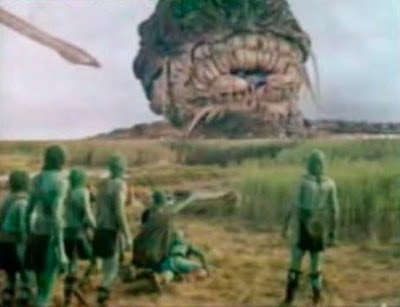 The Fourth Doctor and Romana meet a giant squid and its green-skinned worshippers.

You know, I actually don't think that this story is half as bad as some fans make out. A lot of fans claim this is one of the worst stories ever, but what is actually so dreadful about it? I just don't see anything too horrendous going on here. I would much rather watch Power of Kroll than some of those dreadful later Pertwee stories, like Death to the Daleks. I mean, even if Power of Kroll is that bad, it is still only four parts, while your typical horrendous Pertwee story is in six.

There certainly are some bad things about this story. Apart from Ranquin, the 'Swampies' are all pretty unconvincing. Philip Madoc is wasted in a minor role, while the part of the base commander that he should have been given is played with corpse-like stiffness by Neil McCarthy. The interior set of the rig looks too small to be convincing and looks appallingly like cardboard. John Leeson is surprisingly dreadful when we finally get to see him in the flesh.

Other aspects of the story are a mixed bag. Its nice to see a really enormous monster being attempted in Doctor Who. While the Kroll moster is well designed, the effects used to create it are utterly unconvincing. It is still fun to watch it grabbing people with its tentacles though.

Mary Tamm puts in a good performance as Romana. She gets some good lines, put on the whole her role is handled dreadfully by Robert Holmes in this. She plays no effectve part and ends up as a standard damsel-in-distress. Again, the story is partially redeemed by the brilliant lines given to the Doctor and Tom Baker's performance.

As mentioned above, Ranquin is the only one of the 'Swampies', who gets to shine. He is a total and believable fanatic. His eventual demise in the tentacles of Kroll is well played. Glyn Owen puts in a weirdly bland performance as the gun-runner, Rohm-Dutt. Very disappointing because he is a cool character with a cool name.

There is some interesting politics in this story, with themes of colonialism and racism, but these are not terribly subtle and have been dealt with before in Dr. Who.

The location work is highly effective, with the Norfolk marshes giving the impression of an hostile environment in which one could easily drown in wet mud. The sight of the TARDIS cloaked in overgrown reeds is quite eerie.

Unlike the previous story, The Androids of Tara, the Key To Time story arc actually plays a significant role in the story. Robert Holmes was at least taking the story arc seriously, if David Fisher was not.

I can't be the only one reminded by this story of Lovecraft's The Call of Cthulhu.
Posted by Matthew Celestine at 12:05