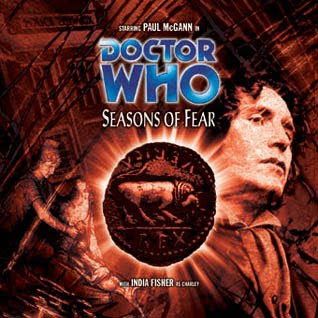 You can't go wrong with Paul Cornell, and Mrs. Cornell also proves to be a pretty fine writer (just listen to her brilliant historical The Council of Nicaea).

Seasons of Fear has been described as a 'road story' in the model of The Keys of Marinus and The Chase. The episodes move from one historical location to another, yet are united by a single plot. This works reasonably well. We also get a touch of The Space Museum thrown in, with the revelation that the Doctor will be killed in the future by the villain.

Sebastien Grayle is one of the best conceived Doctor Who villains ever. He has been granted near immortality and so we are able to see him at different stages of his prolonged existence. This echoes the common theme of Doctor Who, that 'immortality is a curse. not a blessing.' Over the centuries, Grayle descends into increasing madness and depravity. The real tragedy of his character is that this course of villainy began simply with bitterness over a simple matter of land inheritance. Paul McGann's Doctor reacts in abject horror at the idea of this long and bitter existence over a course of life apparently longer than his own.

This story offers us the return of a sadly neglected monster. They don't appear until they end, but they fit the story very well, especially with their catchphrase about a certain journey. I can't help laughing when I hear their voices.

I don't think it was really necessary to imply that Edward the Confessor was an homosexual. I also think the two Georgian characters were not very believable, but these are minor complaints.

India Fisher's Charley comes across well, though this was the first audio I hear with her. This is an audio that is definitely worth getting hold of.
Posted by Matthew Celestine at 11:31