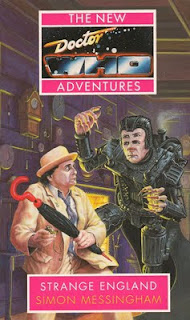 Another Victorian house, another bunch of weird characters, and another artificial environment.

Simon Messingham clearly wanted to be Marc Platt in his early career. In this novel we get a Victorian house with weird characters, a glowing being and lots of talk about things changing. Does that sound like a certain story by Marc Platt to you? It turns out that this is an artificial environment created by a TARDIS. Does that sound like another Marc Platt story? I don't like Ghost Light and I found Cat's Cradle: Time's Crucible a bit too heavy, so a story that attempts to hybridise the two is not really going to catch my interest. It does not help that the Virgin New Adventures had gone to town on artificial environments, so a another one here is not terribly interesting.

Ghost Light just about worked by showing (in a rather cartoon way) how the Victorian era could be a little strange from a contemporary perspective. Strange England rather misses the point and assumes the reader will recognise some kind of normality in Victorian England and then attempts to make this already alien environment weird. It does not work. Victorian England is already an alien place to the contemporary reader, so trying to turn it into a surreal Wonderland does not work. One stars to get tired of all the strange and bizarre elements that Messingham throws in to keep us puzzled. The slow pace makes it especially tedious.

Strange England is filled with violence and pain. I am a little more accepting of violence in the NAs than I am in the television series (or Big Finish). The NAs were aimed at an adult audience and were trying to push boundaries. I don't like the violence, but I understand and appreciate what they were trying to do. I think Messingham goes rather too far. A lot of the violence of this book feels quite pointless and gratuitous. We did not need it. Thankfully, after all the violence and horror we at least get a nice happy ending for the two main minor characters.

Strange England was very much one of the weaker New Adventure novels. It could almost make you wish you were reading a Mark Gatiss novel. Almost.
Posted by Matthew Celestine at 04:21