The Curse of the Black Spot 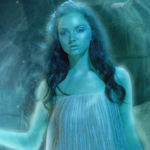 Pseudo-historicals are fundamentally artificial. It makes sense that sometimes the TARDIS goes back in time to earth's past, but it is absurd that every time it does, the Doctor and companions meet an alien life form. It becomes completely silly if there is an alien hiding in every corner of human history. If the Doctor Who production team want to keep doing historical stories, sooner or later they really need to take the risk of doing one without any aliens. It would be a risk with the general viewers, but it needs to be attempted.

The Curse of the Black Spot feels like it is just a countdown to an explanation of what the alien life form is up to. It is a join the dots Doctor Who story.

The Siren looked great. I have something of a liking for the idea of sirens and mermaids. I'm not even altogether convinced that mermaids don't exist. Why did it have to be an alien? I know that is what Doctor Who does usually, but it would be so much more interesting if it turned out that bona fide mermaids existed in the Doctor Who universe. One of the things I loved about State of Decay was that the vampires in that story turned out to be not space aliens, but something much more mysterious. The idea of people getting a black mark and being doomed is a very scary one that would have worked well. The problem was that the fast pace meant that there was no time for any sense of horror.

Captain Avery and his crew were a disappointment. They were such a boring lot and there was little sense that they were a gang of vicious killers. We are also left with the unbelievable notion that they can learn how to crew an alien starship in another universe without any training. An awful lot of the direction is really poor. The scene where the Doctor is made to walk the plank is a mess. The resuscitation scene was horribly melodramatic. We might wonder that the Doctor might not be better equipped to resuscitate Rory.

Matt Smith redeems things a little by giving a fantastic performance as the Doctor. He adds a wonderful subtlety to his delivery of his more comic lines.

I do find it surprising that Amy is so willing to accept that she cannot tell the Doctor about his impending death. She has been told by River that if she gives it away it will cause a temporal paradox, but I am not sure she would understand why that would be bad (I am not sure that I would either). After all, she has seen the Doctor mess about with time before.

Aside from the visual look of the Siren, there was one other thing I liked about The Curse of the Black Spot. This was the nod to The Stones of Blood, one of my favorite stories ever. We have an alien ship with a dead crew stranded in a parallel dimension which contained a green-skinned female alien. All that was missing was the Siren's lesbian lady friend to share sausage sandwiches with.
Posted by Matthew Celestine at 06:37