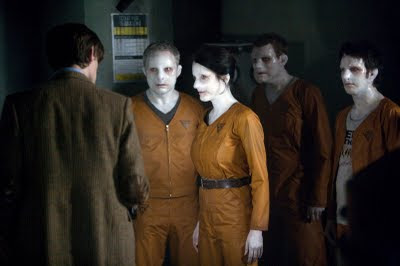 This one comes a little closer than previous efforts to being a decent story. However, it still threatened to send me to sleep.

On the positive side, the look of the gangers was great. It was also good to see an attempt to create a more futuristic look. That was a little spoiled by the unexplained decision to set the story in a medieval monastery for no apparent reason (other than saving money). It is also interesting to see the Doctor knowing more than he is letting on, just like the Seventh Doctor.

This is let down by a sense of predictability. Inevitably, we get the gangers going rogue, lots of running around, all the menace of a base-under-siege and most tedious of all, a load of moral dilemmas about the rights of duplicates. Something done to death on Star Trek and sort of inevitable in a science fiction show. It just does not interest me. Maybe it's because I am so confident in my rejection of a physicalist view of human consciousness. I believe the mind is not something that can be located purely in the biological organ of the brain. I am confident that a duplicate of that sort would be a mindless zombie. Likewise, I am confident that genuine artificial intelligence is an impossibility, so I hate stories about evil computers like Face of Evil. This is a genuinely Doctor Whoish story, but that does not make it good in itself. The Troughton demonstrates how boring a run of base-under-siege stories can become.

One thing which was very much missing was scene setting. It was quite unclear how far into the future this was, why acid was being pumped around, what was generally going on in the world or why this was being done in a monastery that ought to be subject to conservation efforts. Despite the slightly slower pace, we still needed a bit more time to get a feel for this future society.

One thing on my mind is why the gangers wear the same clothing as the originals. I know they don't expect the gangers to go rogue, but they must surely be prepared for them to become unstable. It's like they are just gearing to re-enact The Thing.

Am I never satisfied?

I have read some fans speculating that this is story is the 'Genesis of the Nestenes.' That would be a total contradiction of what we have been told in Spearhead from Space (set before this story) that the Nestene Consciousness began its conquest of space a thousand millions ago. The novels also tell us that the Nestene Consciousness was born from the Great Old One Shub-Niggurath when the universe was still young. Then again, I am not sure that Moffat cares that much about Doctor Who continuity, so you never know.
Posted by Matthew Celestine at 06:15