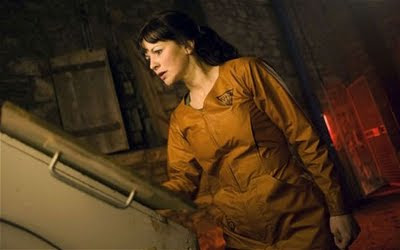 It is difficult to review a two-part story without the risk of repeating oneself. Some of my comments from the review of The Rebel Flesh apply here. Most importantly, the story is weakened by the lack of future world-building. We are not given any further information to explain the presence of the acid, the reason for the use of a monastery as a factory (apart from saving money on studio sets) or how this future society works. It is hard to engage with the story because of the lack of clarity. This becomes far worse in this episode, because so many confusing elements are introduced. Furthermore, we get a whole level of narrative overlapping with the ganger plot relating to Amy's pregnancy.

So much of this story makes little sense. The duplicate technology is problematic. It is suggested that the gangers are exact copies that are in theory so similar that they could replace their originals. Yet in Jennifer's case she possesses the complete ability to manipulate her form and even double herself. We also get no explanation of the ganger Doctor's mysterious knowledge concerning Amy's pregnancy. As for Amy not being the real Amy, this is a narrative trainwreck. So is Amy a ganger? If so, how come the Doctor can reduce her to goo? It has been suggested that she is a different kind of duplicate that has no sentience and merely acts as a repository for Amy's consciousness. How the Doctor could be so sure of that is another question. I like stories like Warriors' Gate and Greatest Show in the Galaxy, where you have to puzzle things out a bit, but unlike this mess, those stories are satisfying as narratives.

The CGI for Jennifer's monstrous form is pretty naff. I think having Jennifer turn into a monster was unnecessary. She was frightening enough as somebody who wanted to kill humans. Her question about who the real monsters are was embarrassingly cliched and unhelpful. It also raises another question, were the original crew aware of the discarded ganger remains? If so, were there no moral questions in their minds? The moral dilemma side of this story was not really handled effectively, even with some of the interesting dramatic exploration of questions of identity. Part of the problem is the lack of a villain. The suggestion is there that the Company (capital C as with all big bad sci-fi corporations) is up to no good. Yet if the writer wants to go down that alley, he ought to have given the Company a larger narrative presence as an antagonist, using some representative to enforce its interests. Cleaves does not seem to take on that role. In the end it just seems like the Company lacked foresight in its use of technology and would inevitably change its ways, rather than deliberately pursuing an unethical course.

I don't like the idea of the Doctor being duplicated very much. The Doctor is a Time Lord. He is an amazing, unique being. It ought to be impossible to replicate such a creature just from goo.

The Almost People has some enjoyable drama, but is a rather unsatisfying story. By the way, I am writing this while drinking a bottle of Fuller's ESB. I am amazed how much quicker my thoughts seem to flow when I am drinking.
Posted by Matthew Celestine at 06:05