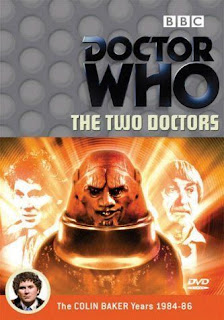 We might have expected The Two Doctors to be a self-congratulatory nostalgia trip like The Three Doctors and The Five Doctors, but instead, writer Robert Holmes serves us up a story that satirises key aspects of Doctor Who and completely defies the expectations of Doctor Who. 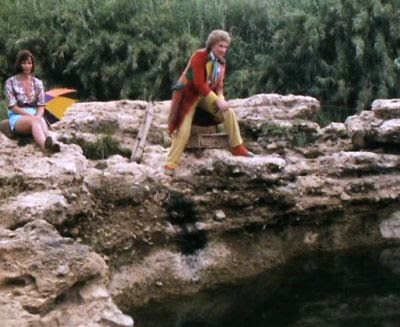 Given that Colin Baker was not a terribly popular Doctor, The Two Doctors could easily have made his position worse by bringing back the charming, delightful old Patrick Troughton. Instead, we are actually made to like the Sixth Doctor because the Second Doctor is presented as quite repulsive. Right from the beginning, we see the Second Doctor being obstinate, rude, bullying, arrogant and displaying an attitude that appears very much like racism. No doubt this is why a lot of traditionalist fans hate this story; instead of giving them the Doctor they love, the Second Doctor is shown up as an arrogant bully. Holmes completely sends up the rather lame idea of a multi-Doctor story and reminds us why it makes sense to have just one Doctor in a story. Amusingly, we are made to agree with the Colin Baker Doctor who says of his predeccessor "I liked you better as an Androgum." 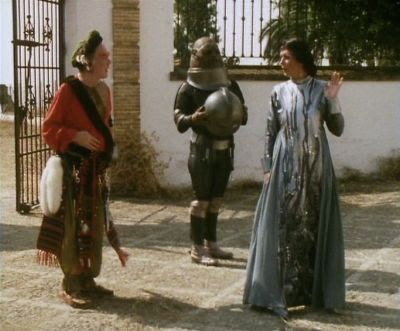 Robert Holmes was never a writer of 'returning monster' stories; it was just not his style. He always worked best with human villains with plausible motives. In this story, Holmes got really clever and deconstructed the idea of the returning monster. Faced with writing a dull plodder about a fix with Sontarans, Holmes gives us another monster, the Androgums. As the Doctor is familiar with them, they are from his perspective a returning monster. The Sontarans in this story are deathly dull; yet the Androgums are a fascinating creation. The reason they are both fascinating and entertaining is that they are so human in manner and appearance; thus proving that actually the 'returning monster' idea is a bit naff.

Viewers of this story are often shocked by the violence of Colin Baker towards Shockeye the Androgum at the end of the story (violence which seems pretty justifiable in the circumstance). They are also shocked by the Doctor's hatred and apparent prejudice toward Androgums. Surely the Doctor would have a more 'progressive' attitude, as Dastari suggests he should? Again, Holmes is deconstructing the standard Dr. Who idea of the monster. Imagine a story in which a character suggests that Sontarans can be improved and taught to be 'nice.' We can well imagine the Doctor desperately trying to persuade this character that this is a hopeless venture and that the Sontarans are brutal and warlike to the core. We know that this is what the Doctor would do because we have such a similar story in Power of the Daleks. Because Sontarans are 'monsters' we are not shocked when the Doctor shows distrust towards them and we accept it perfectly when he deals out death and destruction towards them (as he does in this story). Our own racism is exposed when we find ourselves sympathizing with Androgums because they look like us.

Oscar's death is another satirical take on the Doctor Who format. Countless minor characters meet grisly deaths in this show. We do not bat an eyelid when five or six minor characters are killed off. Yet when Oscar's death is treated with real emotion (as well as an entertaining dose of black humour) fans are shocked and say that is is 'pointless and unnecessary.'

Doctor Who fans are often fascinated by the Time Lords and there has always been a hunger to see the Doctor's own people amongst fans. Thus, we are given stories like Deadly Assasin and Arc of Infinity where we get to see the Time Lords. There does seem to be a tendency of the Time Lords to disappoint when they appear. Holmes demonsrated this in The Two Doctors by giving the Time Lords an incredible presence in the story, without them ever actually appearing. We are very conscious that they are keeping a close eye on the proceedings, right from the first appearance of the Second Doctor as their errand boy. The unseen Time Lords of the The Two Doctors have a much greater impact as the guardians of time and space than the doddery old men of Deadly Assasin and Arc of Infinity.

The Two Doctors is the ultimate 'Rad' story; it is a serial in which the conventions of the show are turned on their head. The story also has a wonderful holiday feel, with it's Spanish location shooting, guitar music and bright mood. It shares a sense of the pastoral with the equally contentious Delta and the Bannermen. It has a delightfully witty script, together with superb performances from the regulars and guests. The only real fault with this story is the appallingly bad Sontaran costumes.

Robert Holmes intended this story to champion vegatarianism and show the evils of meat-eating. This agenda gives it a thematic depth that is very like the Sylvester McCoy era. I am afraid, as with the horizontally challenged Colin Baker himself, Holmes has not succeeded in winning me to his cause. Whenever I watch this story, all that talk of food always makes me ravenously hungry. I find it incredibly difficult to watch this story without tucking into some sort of snack, usually a massive bag of crisps or pork scratchings. Posted by Matthew Celestine at 11:15