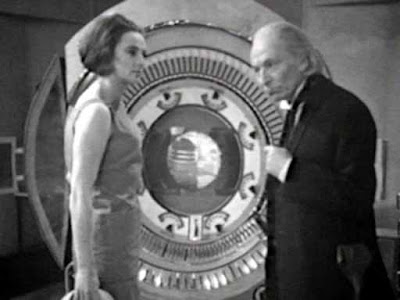 The Daleks have acquired a time machine and hunt for the TARDIS crew throughout the fourth dimension.

I never watched The Chase when I was a child fan, but I was well aware of it and reasoned that it must be a pretty exciting story given that it is when the Daleks first use time travel. Indeed, the discovery of time travel by the Daleks is a truly momentous point in Doctor Who because it lifts them above the level of every other monster and makes them into near equals to the Doctor. In the BBC Wales series, we see the fruits of this with the far more terrifying and deadly Daleks that have overthrown and eradicated the Time Lords in the mysterious Time War. As momentous as the event is, the mood of The Chase does not register it and we are served the most light-hearted comic affair in the history of the show. It is very difficult to forgive the light tone and lack of seriousness in this story, particularly given that this is a Dalek story. The odd appearance of the Daleks means that if they are not taken seriously in the reactions of the cast, they end up looking ridiculous and lose their power to terrify. On the other hand, it is not lacking in imagination and each episode is very fun to watch.

In episode 1, The Executioners, there is a nice, relaxed atmosphere. We have some pithy enjoyment with the Time-Space Visualizer. Aridius is well conceived with the dunes of Camber Sands. There is a minor continuity error here, with Vicki appearing to have removed her shoes when running up the sand dunes (we see this from the distance and it does look like she is holding her shoes) and has them on again when we see her closer up in the studio. The Aridian costumes are rather unconvincing. I think the Mire Beasts look quite good and are shot effectively. The ploy to attract the attention of the Dalek was camp in a really irritating way.

Episode 2, Flight through Eternity has an absolutely brilliant title but in no way lives up to it. We do have to ask why the TARDIS crew get out at every destination they arrive at when they know they are safe in the ship. Peter Purves makes a cameo appearance as an hillbilly from Alabama visiting the Empire State Building. He is absolutely hilarious. Unfortunately, his mockery of the Dalek completely undermines any impact that Terry Nation's creatures have ever made. The Marie Celeste scene's comic vibe is rather jarring given that the crew and passengers all drown. This seems a little tasteless.

The next story Journey into Terror will be enjoyed by anybody who likes Scooby Doo. The set for this episode is incredibly well designed. Roslyn De Winter makes a brilliant appearance as the Banshee-like Grey Lady. She had been excellent in The Web Planet, even with her un-alien plummy voice. I do wish Roslyn De Winter had made other appearances in Doctor Who, because she had enormous talent. The Daleks are once again demeaned by being defeated by funfair robots.

It seems bizarre that the Doctor would conclude that the TARDIS entering the realm of the human mind is a real possibility. I have a pet theory that the TARDIS does eventually take the Doctor into a realm of psychological terrors. I think it does this in... Inferno! I believe that the Fascist Britain visited by the Third Doctor is not a parallel universe but is some kind of inner dimension in which the Doctor confronts his anxieties about the world in which he lives. Think about it; is it not a bit coincidental that in another universe there would be an almost identical drilling project featuring exactly the same personnel? Why is there no Doctor (because its in his mind.)? The Doctor has seen the destructive capabilities of UNIT in Dr. Who and the Silurians and has real reservations about military organisations. These fears are realised in the Fascist versions of the UNIT personnel. The Doctor is concerned about the consequences of continued drilling and in his psychological world, his fears are realised in the destruction of the earth. I think my theory about Inferno makes perfect sense. Now, back to The Chase.

Inside the Dalek time machine, Vicki witnesses the Daleks create a robot double for the Doctor, played by Edmund Warwick. Warwick looks nothing like Hartnell and fails to copy his mannerisms. The robot double plot is dreadfully cliched and is an unfortunate piece of predictable plotting. 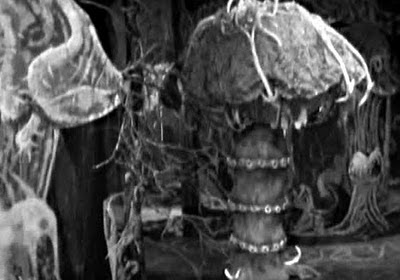 The jungles of Mechannus look dreadfully cheap. Unlike a lot of fans, I think the Fungoids look rather good. Its quite sinister the way they shuffle up to the characters. According to the Missing Adventures novel, The Chrystal Bucephalus, the Fungoids, or Gubbage Cones as they are also known, were once the dominant empire in the galaxy. This suggests that the Fungoids we see are regressive and have lost their former intelligence and civilization. 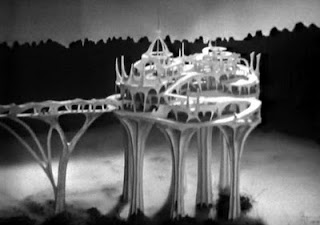 The Mechanoid city is beautifully designed as a model shot. It looks so ethereal. The Mechanoids are not bad, but their voices are difficult to follow. The fight between them and the Daleks is pretty impressive. A lot of viewers will have noticed in the scene on the roof that Ian puts his hand down Barbara's trousers to keep her from falling off. His hand comes pretty close to her behind on the bus later.

The final episode introduces new companion Steven Taylor, played by Peter Purves. Purves is quite brilliant at playing a man who has been without human company for a long time. He seems a little unhinged and positively deranged when he risks his life at the end to save a teddy bear. It is unfortunate that Steven would lose this lunatic qualuty in his future appearances and just become a standard square-jawed hero (though arguably one better played than Ian). The current regulars give unimpressive performances, with the exception of the ever-brilliant Jacqueline Hill. The regular cast seem like they have given up taking the whole thing seriously.

The departure of Ian and Barbara is the best ever departure from the TARDIS we have seen. It is hearbreaking to hear Barbara plead "We want to go home" like a lost child. Hartnell manages to recover his gravitas and give us some real anger. The Hartnell years were built on scenes like this between Barbara and the Doctor. The final still shots of Ian and Barbara on their return are lovely. If we accept the Virgin Missing Adventures as canon then the two of them married and lived very happy lives together. If you want some fluffy romance, then just read some of the fan fiction about Ian and Barbara.

It's interesting that Barbara is always described as wearing boring old-fashioned clothes. In this story she wears a sleeveless dress with the Aztec-like sandals that have been very popular with young girls in the last couple of years.

I think most would agree that The Chase shows how the format of early Doctor Who was becoming tired and this is reflected in comments by viewers at the time. Doctor Who deserately needed some new ideas and these would come in the next story, The Time Meddler, the first to feature another of the Doctor's people.
Posted by Matthew Celestine at 09:14