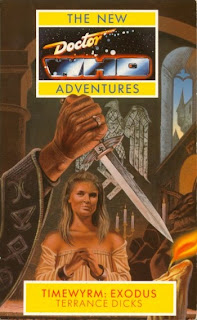 Pursuing the Timewyrm, the Seventh Doctor and Ace discover an alternate post-war Britain under Nazi rule.

This is the first New Adventure novel I read. This is where the New Adventures began for me. I read this when I was eleven years old. Then I read it again and again. It was my favorite book for about a year.

When I was eleven years old, Terrance Dicks was a name I knew and loved. I had read dozens of his Target novelisations and I knew he had written The Five Doctors, which was the first Dr. Who video I ever watched. Dicks' novelisations were easy to read, and so was this. It was exciting, fun and full of great characters and humour that I could mostly appreciate at that young age (mostly).

What is more, it was about the Nazis. Like so many other English boys, I was fascinated by the Second World War and thought the German uniforms were cool. Timewyrm: Exodus was just written for my younger self. This book hardly curbed my fascination. I learned so much about the history of the Third Reich from this book and it got me reading lots of history books to find out more. That was what Doctor Who was originally supposed to do. We all know how Doctor Who started out with an educational agenda, featuring those two teachers who were supposed to help young viewers to learn about both science and history. Well, Timewym: Exodus helped me to learn so much about Twentieth Century history and if I ever meet Terrance Dicks I would shake his hand and thank him for it.

Timewyrm: Exodus was my first introduction to the Seventh Doctor and Ace (apart from that lame BBC science program that the BBC kept repeating back in the early 90s). I had never seen any Seventh Doctor stories, bar ten minutes of The Curse of Fenric which terrified me. I was fascinated by the character of this Doctor. He was sligtly sinister, manipulative and with incredible powers of persuasion. His willingness to be ruthless was obvious, despite his unwillingness to use violence himself. Looking back, I can see that Terrance Dicks gives us a Seventh Doctor who is at times closer to the Third Doctor in his occasional patronising of Ace and his enjoyment of the luxury hotels in the story, but it is still the dark, manipulative Doctor of the New Adventures; however 'Trad' Dicks' leanings might be.

After this, I went on to read other New Adventure novels, though I found most of them much more difficult than Timewyrm: Exodus. Nvertheless, I look back on the era of the Virgin New Adventures as a golden era in the history of the show. It was a time when being a fan really meant something and the mythos of Doctor Who was being explored from new angles. This was the only Doctor Who that was current when I was a young fan, so as I have said before, the Seventh Doctor of the New Adventures was 'My Doctor.'

This is quite a personal review for me to do. I could write some more critical comments about Dicks' style and about the development of the characters. I could make a number of criticisms of this story, but I don't feel I want to. This is a story that meant a lot to me when I first read it and I am sure that anybody who reads it will find it to be one of the most enjoyable of the Virgin New Adventures.
Posted by Matthew Celestine at 11:21