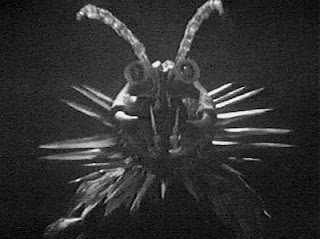 "I would have got away with it too, if it hadn't been for that meddling old man and those pesky teachers!"

The Invasion is not the only story in which the TARDIS crew come to resemble those meddling kids in Scooby Doo. The Rescue is pretty much a reproduction of the standard format of Scooby Doo. You have a villain dressing up as a monster ti scare away honest folk who gets unmasked in the end. Unlike Scooby Doo, the villain on being unmasked is not lead away by the police but attempts to kill the Doctor. Thankfully, he is thwarted and comes to a nasty end.

It is a bit of a cliche that Doctor Who is all about men in rubber suits. In this story, for once the monster really is supposed to be a rubber suit.

The Rescue is one of those rare two-part stories in classic Doctor Who. Some of these are two rushed, like The Awakening and King's Demons. This story, like Edge of Destruction works effectively as a two-parter. It is refreshing to see a Dr. Who story without any padding at all.

We are introduced here to the new companion, Vicki. Played by Maureen O'Brien, Vicki seems to be regarded as a much more popular companion than Susan. I find that disappointing. Susan was a bit wet and she could be annoying, but I still liked her. She had a genuinely alien quality about her that fitted in well with her situation as the Doctor's granddaughter. I am not convinced by the way that Vicki becomes a sorty of surrogate granddaughter in place of Susan. I also don't like the way Maureen O'Brien played the part. Too often it seemed like she was not taking the role seriously and she often looked like she was about to start laughing. When her experiences as a child of the future are mentioned, they are played for laughs. It is all a bit too knowing.

William Hartnell puts in a beautiful performance as the Doctor. I just love the moment at the beginning when he asks Susan to open the doors, then falls silent when he remembers Susan is not there any more. It makes me cry! There is a real emotion to Hartnell's performance. He is also pretty impressive when tracking down and confronting Bennett at the end. Jacqueline Hill is as great as ever. She immediately takes on a protective big sister role towards Vicki.

Bennett/ Koquillion is played by Ray Barrett, who was the voice of the mighty Titan, ruler of the undersea, in Stingray. As a massive fan on Stingray, it's really cool to see Ray Barrett in the flesh, even though his performance is a bit wooden. Aside from the unconvincing nature of his deception, fans often wonder why Bennett keeps Vicki alive instead of killing her. It is hard not to imagine that he is subjecting her to some sort of abuse.

The appearance of the natives of Dido at the end is a bit of a deus ex machina. There is no explanation of how they have survived. Still, if we were to see some more of them in this story, we would have needed another episode and I am not sure that was needed for a less consequential story like this.

I really liked Sandy, Vicki's pet giant centipede. A great friendly monster! Shame it had to die when Barbara got her Ripley moment. 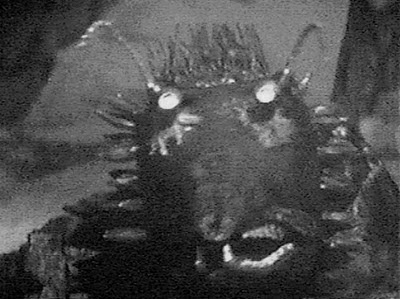 Posted by Matthew Celestine at 03:49