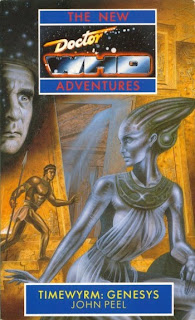 The Seventh Doctor and Ace visit ancient Mesopotamia and encounter an alien maquerading as a goddess.

Yes, this is the blog to read for NAstalgia!

This bok is where the Virgin New Adventures began. I remember reading about the launch of the New Adventures in Doctor Who Magazine back in 1991. I was ten years old then. The idea of new Doctor Who stories in print felt very exciting.

The thing which most sets this novel apart from the Target books is the openness about sex. Having a bare-breasted teenage temple prostitute as a character was a pretty bold signal that the New Adventures were meant for adults! Yet the historical setting and references of the book does remind one an awful lot of the educational nature of the black and white era. One rather feels that the author was attempting to educatate his young readers about ancient Mesopotamia.

Sadly, the Doctor and Ace are not characterised too well in the book. The Seventh Doctor lacks the mystery and depth that he showed in Seasons 25 and 26. Many of the later New Adventures would become preoccupied with exploring the Seventh Doctor's manipulative ways, something we don't see in this debut. We are suddenly told that Ace has a talent for singing, which she had previously denied. Gilgamesh is a fun character, but not drawn consistently. At times in the novel, he appears an idiot, at other times he comes across as rather smart. Making Enkidu a Neanderthal was an interesting idea.

John Peel should never be forgiven for having Ace refer to Paradise Towers when she was never there!

Timewyrm: Genesys was not a bad start for the New Adventures series, though it lacks the depth and themes of later offerings.
Posted by Matthew Celestine at 04:10