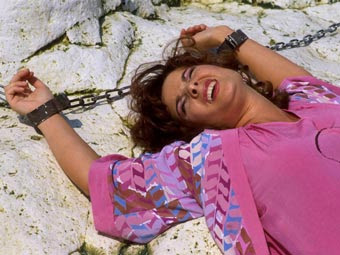 Right from the start of the story in the trial scene, we learn that something has happened to Peri and we are left waiting to find out what this is. This adds an immense sense of tension and foreboding to this story. We start to see the Doctor lose his cockiness and become desperate to make sense of what he sees in the evidence. 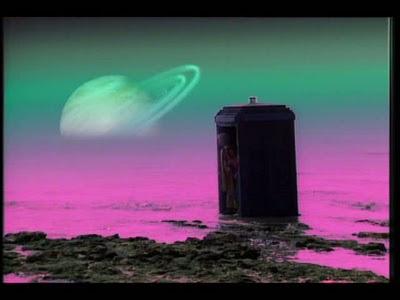 Despite it's many camp elements and despite it looking in many place like a video for a multi-racial 80s pop band, Mindwarp is one very bleak story. Mindwarp is the ultimate elaboration of Eric Saward's vision of the cosmos. Throughout the Saward era, we were given a glimpse of a dark future filled with violence and carnage. Yet Mindwarp is the darkest of all these stories. Caves of Androzani was bleak. There were no nice people in that story; only a lunatic with a deformity and a massive grudge, brutal mercenaries and self-serving capitalists. Nevertheless, for all it's darkness, in the midst of Caves of Androzani, we had the faithful and compassionate Doctor, steady as a rock. Mindwarp takes away that last security. In Caves of Androzani, Peri could depend on the Doctor in an hostile universe, here he has finally succumbed to the sheer monstrosity of the cosmos and given in to it. The Doctor who gave his life for her has become a coward, a traitor and a perversion of what he was before. This makes this the darkest of Dr. Who stories. This is a story about how the Doctor who once saved Peri comes to betray and fail her. 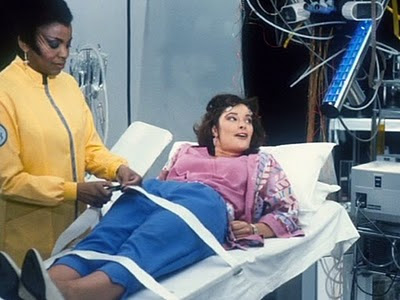 The tragic nature of this story makes one feel that it would make a great opera. This is Peri's tragedy, a story of betrayal by the one man she could rely on. The story focuses on her, showing her growing realisation that she could die alone, away from everything she knows and loved. We see her finding solace and camaraderie in the only characters who come across as sympathetic, Ycarnos and Dorf. There is a sense of irony in this, in that they are bloodthirsty barbarians who delight in killing.

Practically everyone agrees that the best part of this story is the climax when we see Peri, her head shaved and her personality replaced with that of Lord Kiv. Nicola Bryant is quite chilling when she speaks in the deep voice of the new personality invading her body. Peri's shaved head may be an allusion to the holocaust, the ultimate scene of dehumanisation. Since the introduction of the Cybermen, Doctor Who has often dealt with the theme of dehumanisation. The destruction of the human personality seems to many people a fate worse than death. In the figure of the shaven-headed Peri speaking with Kiv's voice, we have a far more stark image of the destruction of the human personality than the Cybermen ever were. Many of us fans feel deeply disappointed that the decision was made to reverse Peri's fate and let her survive this story Dallas-style. It makes sense aesthetically that Peri whose life was saved by the Doctor should die in the end because of the Doctor's failure. It creates a much greater sense of tragic pathos.

A good deal of the unpopularity of this story is no doubt down to the agony for fans of watching the Doctor become so selfish and cowardly. When we see Peri chained up and alone with the Doctor, we are made to hope that the Doctor is going to explain his plan to her, but we become horrified when we find that he really has betrayed her. Of course, we are not helped by the fact that Colin Baker had absolutely no idea how to play this role; the scripts had not been clearly explained to him. There are in fact four possible explanations of why the Doctor is acts the way he does in this story. It may be that he is suffering the effects of Crozier's brain tampering. It may be that the Matrix has been altered to distort the record of the events (which we find out has occurred in some places, but not necessarily those relating to the Doctor's odd behaviour). It may be that this really is a trick and the Doctor is pretending to descend to evil; though this is difficult to believe when he could easily have proven his good faith when he was alone with Peri on the rocks by the sea. Most disturnbing of all, it could be that the Doctor realy has succombed to the cowardice and malice that he showed after his regeneration in The Twin Dilemma. To my mind, this is the most interesting possibility. The Doctor's fifth regeneration does seem to have been particularly traumatic and the unstable beahviour he showed in his first story can be seen throughout season 22. It seems to me that the Doctor was going through some sort of mental crisis throughout his sixth incarnation that reached it's climax in this story. No doubt this crisis intensified by Crozier, but it cannot be separated from the instability that he had shown prior to this. I understand that a lot of viewers find the uncertainty rather confusing, but I find it quite interesting. The fact that it is not explained leaves us room to think about it and puzzle out the Doctor's out of character behaviour. 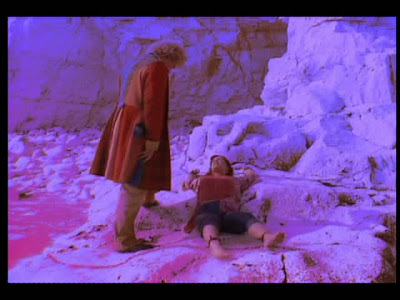 Brian Blessed is hilariously over the top as Ycarnos. Some viewers might find his performance irritating, but he does inject some life into an otherwise rather bleak serial. Some people feel that Patrick Reycart (Crozier) is a bit wooden. I feel that this reflects the character. Crozier is a totally amoral figure. He has no politics, agenda or even cruelty. He simply wants to perfect the techniques he is researching. He is the cold face of science without ethical resraint. The moment when he sips tea from an old fashioned cup and saucer before carrying out his surgical procedure is beautiful. It just sums up the banality of the character.

It is fun to see Nabil Shaban again, as the slimy Sil. Some fans feel he is less effective here as a flunky and sycophant, rather than as the big villain. I think it is interesting to see him in a different position, and it allows us to see him in a double act with Kiv (who is ably played by Christopher Ryan and later Nicola Bryant). After all, we got to see Darth Vader twice as a flunky and only once as head honcho. The rest of the guest cast are pretty awful, the worst offender being Gordon Warnecke as Tuza. The monstrous Raak is unusually well filmed for a Dr Who monster. We only get brief glimpses of the creature, which is a lot better than the usual full frontal view.

This is a really brilliant story that is often too quickly dismissed by fans who have no love for this troubled period in the history of the show. I think for those of us who have grown up with the New Adventures, Mindwarp is probably not so shocking. The New Adventures followed up Eric Saward's bleak vision of the universe and also occasionally bring ambiguity and doubt about the Doctor's workings.
Posted by Matthew Celestine at 04:26