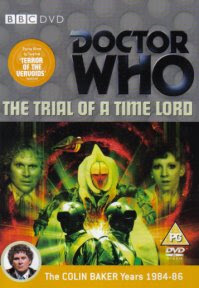 "Your defence is that you improved? This I must see!"

Having witnessed in the Matrix the death of his companion, Peri, the Doctor has lost the arrogance and cockiness that he showed in the first story of the Trial series. He is now far more subdued and rather melancholy.

The Doctor is given the chance to make his defence. He does so by presenting an adventure that takes place in his future, involving a companion he has not met. His defence is that his conduct improved and that his intervention was requested by somebody in authority and that it was vital to the protection of countless human lives. I am not going to begin to discuss the complexities and anomalies involved in the Doctor knowing about a future adventure. Let us just say it is a bit of a mind-boggling notion. As I mentioned when reviewing The Mysterious Planet, if this was an American sci-fi show or made by an independent television company, this season would have included a story featuring stock footage of at least one older story. This would make sense as I can think of plenty of adventures that could have been forcefully used by the Doctor in his defence. He could have mentioned the many occasions in which his intervention was arranged or ordered by the Time Lords. He could have mentioned the stories of Season 16, when he was asked by the White Guardian to retrieve the Key to Time. He could have mentioned the Dominators and those dreaded Quarks- hang on, he already did that last time he was put on trial.

Judging from the DVD commentary, Pip and Jane Baker are absolutely lovely, kind people who one would just love to meet. Unfortunately, they seemed unable to write convincing dialogue. The script for this story is really bad in places. On the other hand, they have created a really effective Agatha Christie style murder mystery. I would argue that this story works much more effectively as a murder mystery than the dreadfully overhyped Robots of Death. In Robots of Death, you knew a robot did it (if the title did not give you the clue), so it is not difficult to work out which member of the crew is most likely to be the culprit. The detective element works better in this less well regarded serial. 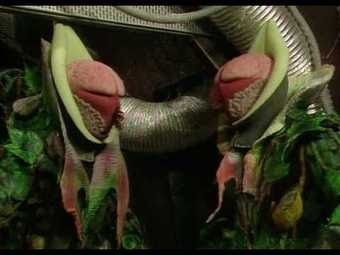 With vicious monsters on board a spaceship, we know we are in Alien territory. Doctor Who knows this territory well, after all, it got there first with Ark in Space. The production team certainly don't let us down with the Vervoid costumes, bar the odd moment when you can see what the actors are wearing underneath. I am a bit puzzled by their intelligence, knowlege of human technology and their command of English (or whatever language the crew and passengers speak). Some fans have raised the question of how the Vervoids have come to be armed with stings when they are bred as servants. Probably, they are crossbreeds of various plants, one variation of which must have possessed a poison sting. On the other hand, it could be that they have really been bred for military purposes. The mutated woman is very well created, though she is rather superfluous to the plot.

I struggle a little with the notion that the arrival of the Vervoids spells the extinction of animal life on earth. There is hardly an army of them on board. I am sure they would not stand up to a sustained bombardment of weed killer. One also wonders why the Doctor does not mention, when charged with genocide, that the Time Lords ordered him to commit genocide against the Daleks and that the Time Lords committed genocide against both the Vampires and the Fendahl. For all people complain about the excessive continuity of mid-80s Dr Who, it all get's forgotten in the Trial of the Time Lord. 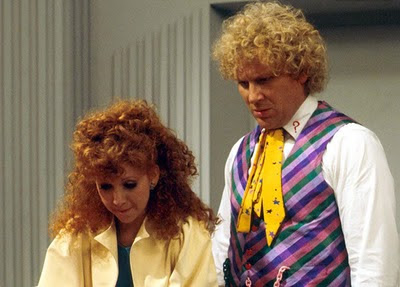 It really does seem in this story that the Sixth Doctor has changed and improved. Colin Baker plays him as a much more affectionate and likeable character than before. I also think his new waistcoat and tie are an improvement, though I am sure a lot of fans will hate both versions of his costume. Baker has a real chemistry with Bonnie Langford. Mel is a companion who is tailor made for the Sixth Doctor. Her cheerful disposition counterbalances his tendency to moodiness. I am not quite sure how she manages to get him to exercise against his will. It is impossible to imagine Peri forcing the Doctor to do anything against his will.

Mel is a rival to Adric for being the most hated companion, but I really like her. As much as I like Tegan and Peri, it is refreshing to have a companion who enjoys being with the Doctor. I have said before that I cannot stand Jo Grant. I find it hard to reconcile in my mind how I can like Mel, but hate Jo Grant when both characters share a number of qualities. I think perhaps it is because at this period of the show, it was all being taken less seriously. There was room for a larger than life character like Mel. Pertwee played his part absolutely straight and his stories were written to be taken seriously, hence the presence of the childish Jo Grant was an irritation. Bonnie Langford gives her best performance here in Terror of the Vervoids.

The guest cast in this story are decent enough, though none of them particularly stand out. It is nice to see Honor Blackman doing her turn in Doctor Who. The spacecraft set is very well designed, even though it wobbles once or twice. The black hole special effect really is awful.

This is truly an enjoyable story in the good old-fashioned Doctor Who style. Quite a switch from the rather 'Rad' second part of ths series.
Posted by Matthew Celestine at 04:25