The Edge Of Destruction 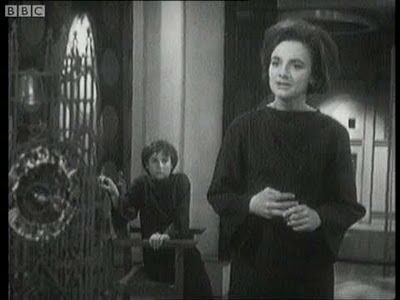 Weird things are going on inside the TARDIS and Susan goes bezerk with a pair of scissors.

Also called by the less inspiring title of 'Inside The Spaceship.' Debating the correct title of early Doctor Who stories seems a good deal less interesting than trying to figure out the dates of UNIT stories, but some fans like to obsess over that particular issue.

Given that the TARDIS concept was completely fresh, it is natural that the viewer would appreciate an exploration of the TARDIS' interior. Thus, it made perfect sense to do a story set entirely inside the ship. Once viewers were more familiar with the TARDIS idea, 80s stories which spent large amounts of time onboard the TARDIS were questionable. Of the later explorations of the TARDIS, I think The Invasion Of Time is the best because of its quirkiness. The trip through the TARDIS in Castrolvalva was rather dull. The Edge Of Destruction got there first and brings home the unearthly character of the ship.

This story captures the creepy atmosphere of an haunted house. The scene with Susan and the scissors is genuinely disturbing. The story also has a very theatrical feel, with its shortness and unity of location. The claustrophobic atmosphere among the TARDIS crew rather suggests one of Harold Pinter's plays. After the excitement and adventure of the previous story, The Edge of Destruction provides some much needed character drama, enabling the resolution of the tense relationship between the characters. In this story, the Doctor reaches the height of his hostility towards Ian and Barbara, yet finally manages to reach accommodation with them (despite his inability to say sorry to Barbara).

William Hartnell is excellent as the Doctor. He becomes quite terrifying as he threatens to throw Ian and Barbara off the ship in their nightwear. Yet it is lovely to see him realising his arrogance at the end and making friends with Barbara, even though unable to utter the words "I'm sorry." 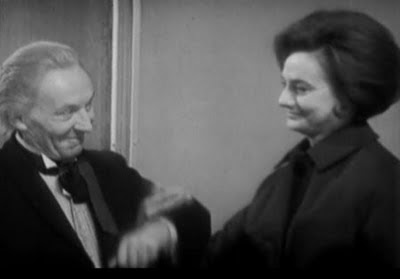 While Hartnell is fantastic, Jacqueline Hill is the real star as Barbara. She gives a truly powerful performance. We see just how hurt and disgusted she is at the Doctor's arrogance. We see her refusal to excuse him until she is sure he is really sorry and she shows real nobility in finally accepting his friendship. This is probably not William Russell's best performance. It is safe to say that he is at his best when he is acting the part of the square-jawed hero, and the psychological drama is not his style.

Susan has never been the most popular of companions. She was often badly scripted and Carol Ann Ford was never the best of actresses, but I have a liking for the character. Susan had a wonderfully ethereal quality that is particularly at home in this story. This is very much a story to suit Carol Ann Ford's role.

This story is very different to what was to come, but it plays a vital part in the early part of the show's mythology in easing in the disturbing and Machiavellian character of the Doctor and enabling viewers to come to terms with him and his relationship with the other characters.
Posted by Matthew Celestine at 10:21