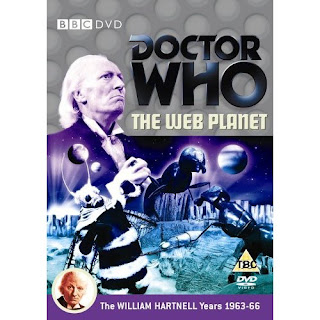 Although my main passion in Doctor Who is for Sylvester McCoy and the New Adventures era, I also have a great love of the Hartnell era. A lot of fans choose to ignore this early period of Doctor Who. You even get some fans who continually bemoan the loss of so many Troughton stories while ignoring the reasonably large stock of Hartnell stories that are extant. Common complaints against the Hartnell era are that stories are too slow and that Hartnell was a terrible actor. The first complaint has some substance, but the second is a little unfair. I think most fans don't give Hartnell enough attention to see how he can shine. So, as I said, I am an huge fan of the Hartnell era and I even like some of the stories that have not dated so well, such as The Web Planet. Oddly enough, when I made the decision to renew my interest in Doctor Who, just over a year ago, The Web Planet was the first DVD I bought and watched.

Part of the charm of the Hartnell era is the sheer diversity of the stories. While fans rave about the brilliance of the Troughton years that they have never seen and are unlikely to see, it must be acknowledged that the Troughton era was very limited in its scope. A format set in of producing endless 'base under siege' stories, and where the base was dispensed with, a monster was usually brought in. The Mind Robber avoids the B-movie format, but in my judgment has a weak narrative and fails in its impact. The production team were so used to the formula that they struggled to do something different. In contrast, the Hartnell years of boundless experimentation. As Miles and Tatwood say in About Time Vol.1, it could have been very different. We could have been served a few wondrous, ratings-grabbing, all-guns blazing Dalek stories and a load of budget saving historical pieces to fill in. Instead, we got quite a few stories that did not fit either of those formats. In The Web Planet we have a truly experimental story in which there is an entirely non-human or even humanoid cast, apart from the regulars. The Web Planet takes the bold step of trying to realise a completely alien world.

The complaint that this serial is far too long is easily understood. There are many parts that are clearly padding and could easily have been trimmed. On the other hand, like all of these slow black and white stories the ready defence is that it was never meant to be watched in one go like a movie. These days we are far too used to fast pacing. There are a few rather formulaic elements in the narrative, such as the splitting up of the companions and separation from the TARDIS. The absence of Barbara from an whole episode (while Jacqueline Hill was on holiday) is rather unfortunate, but this is typical of that era. 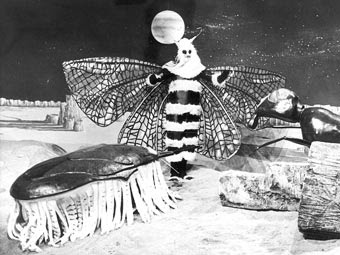 One of the phrases that comes up most often in reviews of The Web Planet is 'school play.' Its a fair cop. There is something of the pantomime about some of the costumes. The Menoptera don't look at all like real insects and are easy to laugh at. Worse still, the look of their heads changes during the serial! The Optera are even more hilarious to look at. The Zarbi do look like giant ants- if you ignore their hindlegs and their dreadfully unconvincing movements. Comparison is often made with 50s B-movies like Them! which effectively realised giant insects. I think this is an unfair comparison. Doctor Who in this era was not conceived as a televised B-movie with effects that could be compared to the cinema. So much of BBC output in the Sixties was seen as televised theatre. Audiences were expected to suspend their disbelief. I think deep down, classic series Doctor Who fans also take this theatrical view of the show and are able to suspend their disbelief when watching the show. It is more of an exercise with an Hartnell story like The Web Planet. When the suspension is acheived, great enjoyment can be had of this story.

Despite the weakeness of their costumes, both the Menoptera and the Optera come across through their speech and movement as very alien. Their dialogue, the way they mispronounce the names of the regulars, the grunting of the Optera and the balletic movements of the Menoptera all create a quite magical sense of wonder. Andrew Cartmel complained about Roslyn De Winter's plummy voice ruining the effect, but I thought her lovely plumminess quite added to the charm.

The creation of the lunarlike surface of Vortis and its astra skyline is simply gorgeous. The place is so unearthly. The strange architecture of the temple of light is also great. The use of vaseline on the camera lens to create a blurred view is interesting, but does create awkward viewing. On the whole, the low-budget effects suceeding in creating a sense of atmosphere that is much stronger than the story. In The Web Planet, we feel that we are in a totally alien cosmos. If you let it, you can capture a real sense of dreaminess watching this serial. 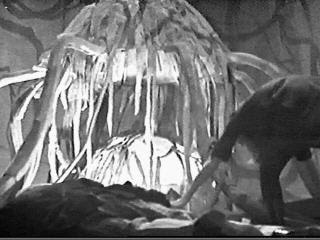 The Animus is a brilliant enemy. Choosing to use a woman's voice was inspired and it is a chilling one. A lot of fans complain that the Animus is a bit disappointing when finally scene at the end. I disagree. I think the completely alien appearance of the Animus makes her look rather impressive. We are told that the Animus came to Vortis from an 'astral plane.' This suggests that in its natural form, the Animus is an ethereal, incorporeal entity like the Great Intelligence of the two Yeti stories. According to the New Adventure novel, All-Consuming Fire the Animus is Lloigor, one of the Great Old Ones of Lovecraft's Cthulhu Mythos. This idea is of course where I got the URL for this blog.

The Carcinome, the Animus' lair is very well designed and realised; with it's organic growth and it's gun. It may be seen as a prototype for the amazing Axonite spaceship in Claws of Axos. The moment when Vicki and the Doctor are covered in web is also very well done. It might be asked why the Carcinome is not much bigger if it has consumed most of the plant life on Vortis. There is also the question of why the atmosphere of Vortis and its gravity has not changed if the planet is able to draw in new moons through the power of the Animus!

William Hartnell gives a somewhat uneven performance. He is giggling like a lunatic at the beginning and dreadfully unconvincing, but he later returns to form in his interactions with the Animus and the Menoptera. He does spoil this, however, with his ad lib "Drop down that hairdryer." I am disappointed in anybody who found that line funny, as it is a tragic indication that Harnell was not taking this story seriously. In The Web Planet, we continue to see the morally ambivalent First Doctor. When he learns of the conflict between the Animus and the Menoptera, he shows little inclination to take sides; his main concern is the safety of his companions and the return of the TARDIS. He later shows the same concern about getting his ring back. It is refreshing to see these Hartnell stories where the Doctor is not always so inclined to be the hero.

I am not a big fan of Maureen O'Brien's Vicki. I think she is too obviously an attempt to replace Carole Anne Ford's Susan, which does not feel quite right considering the importance of Susan in the beginning. O'Brien's performance here is hardly brilliant and she shows signs of not taking the story seriously. Jacqueline Hill and William Russell nevertheless give this story their best shot. Of the guest cast, Roslyn De Winter, with her posh voice, is the best. She would also appear in The Chase in a very small part. It is a shame she did not appear in other Dr. Who stories. Martin Jarvis also puts in a good first appearance in the show.

Everybody who likes Doctor Who needs to give this story a chance.
Posted by Matthew Celestine at 05:32