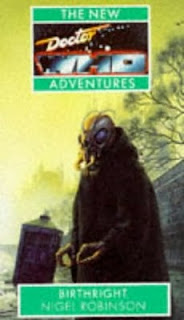 The Doctor has disappeared leaving Bernice in Edwardian England and Ace on an alien world. Has Spring-heeled Jack returned to commit grisly murders?

I was pleased to find that this book was totally different and much better than Nigel Robinson's previous New Adventure, Timewym Apocalypse. Apocalypse was very 'Trad' and read very much like a more complicated Target novelisation. Birthright is a much more 'Rad' offering with most of the elements that characterise the New Adventures, those things that some of us love and Traditionalist fans hate.

Birthright has two main settings, the first of which is Edwardian London, which is presented as a very grim place. Birthright has plenty of prostitutes, bloodthirsty mobs, a prison catfight and the obligatory secret society. Bernice is left by the Doctor in this rather lurid place and becomes involved in investigating a series of horrible murders. This is immensely entertaining and demonstrates the fact that the New Adventures set on earth tended to be much more enjoyable than those with futuristic or alien settings (not that those NAs set in the far future are not worth reading- they certainly are!). The other setting is an alien world, where Ace helps humanoids to defend themselves against insectoid oppressors. This perhaps not so interesting, but makes a good contrast with the previous section of the book. This alien world turns out to be earth in the far future. I am not quite sure how well this fits in with other continuity, but Lance Parkin managed to make sense of it within his incredibly vast Doctor Who chronology.

Birthright is mostly characterised by the absence of the Doctor. Yet we feel his presence throughout the story in his reported interactions with the other characters. We are shown something of how he takes care of his former companions after their departure, a revelation that does not fit so well with the absent-mindedness often displayed by the Doctor onscreen. The view we get of the Doctor in this story is the classic New Adventures view of him as a master manipulator, constantly moving the characters around like chess pieces to execute his complex schemes. Those of us who appreciate the Seventh Doctor should love this, particularly the fact that Bernice comes to question the Doctor's integrity in the way that Ace did in Ghost Light and Curse of Fenric.

The cover, depicting the alien moster, is pretty good. The alien Charrl are well conceived. Jared Khan is a good villain too. What is particularly fascinating is his hunt for the Doctor and the TARDIS across the long ages of history. At the climax, he and Benny engage in a virtual reality conflict within the mind of the TARDIS. These virtual reality conflicts are a bit of a NA cliche, but it does give us some 'NAstalgia' when you read it today. Back in the nineties, virtual reality was a very hot idea.

At the story's end it all goes 'Cartmel Masterplan' with the Doctor visiting a mysterious character called Muldwych, in apparent breach of the Laws of Time. Fan consensus seems to be that this chap is the future Merlin version of the Doctor, though the fact that he needs the Seventh Doctor to tell him about his adventures makes this identification odd.
Posted by Matthew Celestine at 05:58