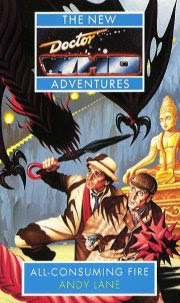 The Seventh Doctor, Ace and Bernice team up with Sherlock Holmes and Doctor Watson and tangle with an eldritch entity.

I think it is fair to say that a Holmes crossover would not have worked with John Pertwee or Tom Baker. The reason being that in those periods of Doctor Who the philosophy of the show was essentially that of the Holmes mythos: everything can be explained rationally. Inevitably, the Third Doctor and Holmes or the Fourth Doctor and Holmes would have clashed for having too similar a methodology. One would be the loser of such a crossover. Once we move into McCoy territory, everything is a bit more esoteric and not every weird story is given a rational explanation. This is the worldview of the New Adventures and it puts Holmes at sea and creates a welcome contrast between his world and that of the Doctor's.

The first half of the book is set in London, where Holmes is in his element. The second half moves to the planet Ry'leh (a borrowed Cthulhu Mythos name). The use of narration by Watson is a very good element, providing an 'everyman' perspective on the events of the narrative. His descriptions of Bernice and Ace are very enjoyable.

As I said, this is also a Cthulhu Mythos crossover. This story effectively takes the Old Ones, the strange alien deities of the Mythos and incorporates them into the Dr. Who canon. The Great Intelligence, we are told is Yog-Sothoth, Fenric was Hastur the Unnameable, the Nestene consciousness is said to be the offspring of Shub-Niggurath,the Goat With A Thousand Young and the Animus of Vortis is said to be Lloigor, a lesser known Mythos entity. The Doctor has not yet encountered Nylarthotep, who is said to be the most powerful of the Old Ones. These beings are all survivors of a universe that pre-existed this one. Azathoth, probably the most powerful and supercosmic of H.P. Lovecraft's Old Ones is said to be the weakest. Perhaps disapointingly the chief monster of this story turns out not to be one of the Old Ones, but an alien impersonating Azathoth.

It is odd that writers try to cross Sherlock Holmes with Lovecraft's Mythos because they are completely at odds in terms of their worldview. For Holmes, the world is ordered and rational, for the Mythos, the world is ultimately chaotic and without meaning. Doctor Who in its supposed glory days with Pertwee and Baker very much echoed the Holmesean view (with a few nods to Lovecraft here and there), but with the Sevent Doctor territory we are very much away from that world of rationality and there is room for a Cthulhu crossover. On the whole, All-Consuming Fire steers away from the darkness of Lovecraft. While Neil Penswick's The Pit did not explicity cross Doctor Who with Mythos fiction, its depressing style was much more in the spirit of Lovecraft than this rather cheerful story. There is an element of Lovecraftianism here in Holmes depressed and despairing reaction to the world of Ry'leh, but we could have done with a bit more of this.

Bernice is well portrayed here and is shown to a truly effective companion. Like Terrance Dicks in Blood Harvest, Andy Lane portrays the brutal, gung-ho Ace as a figure of fun, rather than a source of angst. The Seventh Doctor also comes across well in this story, Having him described by Watson helps to maintain the mystery of his character.
Posted by Matthew Celestine at 08:31