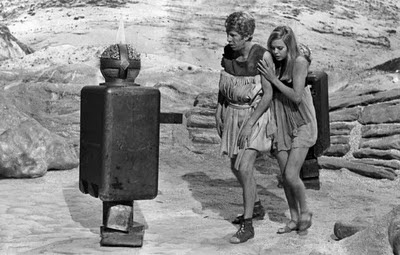 The Second Doctor, Jamie and Zoe visit the planet Dulcis and foil alien invaders with bad posture and their cute robots.

If you did a straw poll of the black and white story that fans most hate, it is probably The Dominators. This serial is very poorly regarded. What makes the fan hatred worse is the fact that this story had the cheek to survive, while Fury From the Deep, Power of the Daleks and The Macra Terror have been lost. What is it that fans hate so much about this story?

The cutest robots ever to appear in Doctor Who. When you want scary monsters, making them cute is a bad idea. Perhaps, if you trouble yourself to think about it, it might make them a little sinister. On the whole, they are fun to watch and laugh at.

If you are an even more obsessive fan than I am, you will have made at least an attempt to work out how many Quarks the Dominators brought with them and how many are left at the end.

Why is it that whenever you see male characters on t.v. wearing long tunics or flowing robes, viewers describe them as 'dresses' or 'frocks?' It may be the norm in western culture for men to wear bifurcated clothing, but in some parts of the world and in many cultures in the past, men wore non-bifurcated clothing like robes or tunics. That people today have a problem with this is a sign of cultural arrogance (or just ignorance).

I actually rather like the shower curtain robes, gowns and sandals that the Dulcians wear. The female characters look very attractive and the men look elegant in a neo-classical way. They look much more original than the jumpsuits, waistcoats and boots look that so many space age cultures are decked out in across post-Star Wars science fiction. Its great that Zoe gets to wear a Dulcian costume too. 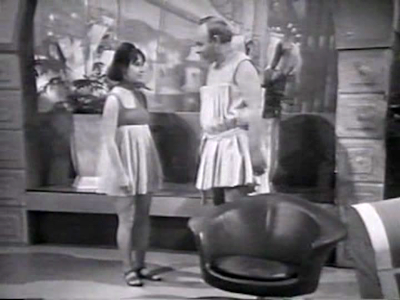 A boring bunch of tedious pacifists. True. Which makes it fun to watch them getting slaugtered by the Dominators. Not the most edifying entertainment, but you can't say it makes viewing a dull experience.

Its odd that fans sometimes call Pertwee the 'Tory Doctor' (though often Pertwee fans are more conservative, or at least hostile politically correct tendencies) when it seems perfecly clear that it was during the Troughton era that the show was at its most right-wing and militaristic phase.

During the Second Doctor era, the writers absorbed a lot of Cold War paranoia and so we have a Doctor who speaks about 'corners of the universe that have bred the most terrible things, things that are against everything we believe in. These things must be fought!' Many of the stories of this era echoe the paranoia of Invasion of the Body Snatchers. The First Doctor seemed determined to avoid getting involved, the Second Doctor seemed to go out of his way to deal with villains and monsters with dangerous ideological tendencies. This Doctor was much more prepared than some of the other Doctors to use deadly force against his opponents. He had been happy to wipe out the Macra (we have all watched Gridlock, so we know that the Macra were building an empire, but there was none of this in The Macra Terror. The Macra seemed to be happily going about their business) and in this story he blows up the Dominators with their own bomb.

Naturally, the right-wing values of the Second Doctor era are not exactly the ideology of the average leftie Dr Who fan, but is it not a positive thing that the show has adopted different postures and ideologies at different times? Even in the Second Doctor era, The Macra Terror offered some rather liberal sentiments. Besides, was it really so irrational to believe that Communism was a menace that needed to be fought? Surely, Communism was a global terror that brought unhappiness and tyranny to millions.

So what is great in this story?

The Dominators are pretty good. Their costumes are clever; in that they cause the wearer to sluch forward giving them a non-human look without any rubber mask. Unlike a lot of other aliens in Doctor Who, they have individual personalities. The conflict between Rago and Toba is an interesting feature of this story.

And of course, Patrick Troughton is glorious in his mania. He is so funny in his pretence of being stupid. Also charming is the way he jumps for joy when blowing up the Dominator spaceship. I think it is safe to say that the Second Doctor would have got on very well with Ace, probably even better than with the Seventh Doctor! We also get great supporting performances from Wendy Padbury and Frazer Hines.

I would seriously challenge fans to give this story a try, and if they do, they can be sure to find something in it to delight. I would honestly say that this is my favorite surviving Patrick Troughton story, and that is not just because I read the novelisation when I was nine years old.
Posted by Matthew Celestine at 04:25