Image of the Fendahl 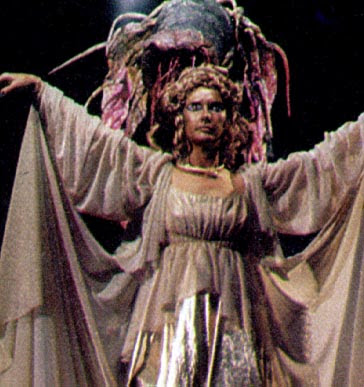 The Fourth Doctor and Leela face a terrible being that is connected to the evolution of the human race.

Gothic horror in Doctor Who is most associated with the producership of Phillip Hinchcliffe. However, after Graham Williams took over as producer, his first season included two stories, Horror of Fang Rock and Image of the Fendahl. I would argue that these two stories are in some respects rather supeirior to much of the gothic horror of the Hinchcliffe era. Brain of Morbius, Pyramids of Mars and Robots of Death are good stories, though they have considerable faults (most notably a strongly sadistic tendency) and are very much one-trick ponies. I think the two Williams-Gothic stories manage to transcend some of the limitations of Hinchliffe-Gothic. Where Pyramids of Mars was grim and humourless, Image of the Fendahl has a terrific sense of fun. Where Brain of Morbius looked horribly cheap, Image of the Fendahl manages to minimise the impact of its cheapness. Where Robots of Death showed a sadistic delight in violence, Image of the Fendahl tones down the brutality and relies on atmosphere (though the Doctor's giving Stahl the gun to kill himself is a bit of a shock).

The strongest element of Image of the Fendahl is its tremendous sense of atmosphere. Its a perfect story to watch on a dark autumn evening. It creates such a strong sense of overwhelming cosmic terror. This is particularly enhanced by the large absence of a musical score in favour of creepy sound effects.

Image of the Fendahl is a story about a monster that is not really a monster in the conventional sense. We don't see what it is that kills the hiker. We see a sinister old skull, we see maggot-like creatures and we see a sort of goddess figure, but neither is in the fullest sense the Fendahl. The Fendahl is a kind of intangible cosmic terror. Like the stories of H.P. Lovecraft, this serial relies on a terror of something that is never fully realised and never described. The story implies that the Fendahl is really a concept, death itself. This metaphorical idea generates a sense of climate in the story does not really fit with the science fiction trappings. A more effective metaphorical evil would be used later in Curse of Fenric. 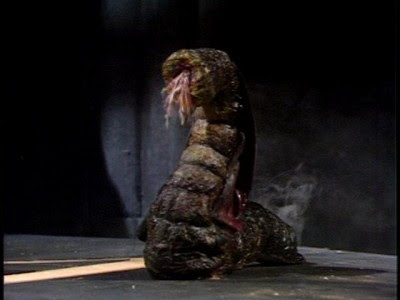 The worm-like Fendaleen are very well designed. Their maggot-like appearance makes them as much potent symbols of death as the skull. The goddess-like figure that Thea is converted into is very effective, even with the daft use of make-up to create bi eyes. Seeing Death as a woman is unexpected, but fits in with a number of mythologies. The Fendahl woman is most effective in that she does not speak and interacts little with the characters. This makes her an utterly alien and unfathomable figure. This is a considerable improvement on Sutekh in Pyramids of Mars. Gabriel Woolf was fantastic at playing Sutekh, but the fact that he talks and communicates with the Doctor removes his aloofness as a god-like figure. For all Gabriel Woolf's brilliance, Sutekh remains another masked villain. The same may be said about Azal in The Daemons. In contrast, Image of the Fendahl gives us a Quatermass-like sense of dealing with the incomprehensibly alien.

The stereotypical yokels have been criticised, but they do add a sense of fun that does not really detract from the darkness of the story as happened with The Daemons. Mrs. Tyler is hilariously fun and her grandson is a great character too. Even Ted Moss is a decent enough character, if underused, character.

Adam Colby is a great character that stands out. Usually male non-regular leads are wet and bland, but Colby is given some great witty lines. He comes across as quite a convincing smug young scientist. Wanda Ventham puts in a pretty good peformance as Thea Ransome. Fendelman and Stahl are also well played.

Louise Jameson is on top form as Leela. I am of the unusual opinion that Leela was better used in Season 15 than Season 14. After the departure of Hinchcliffe, the rather banal 'Eliza Doolittle' idea of the Doctor educating Leela seems to have been largely dropped. I feel the idea of Leela needing to be civilized rather demeans her character and does not seem true to the Doctor. I much prefer the idea that the Doctor likes having Leela around because she is funny and is useful for threatening people. In this story, Leela is wearing the dress version of her costume rather than the original leotard. I think this looks a lot better. I have mentioned before that I think it is doubtful that a primitive tribe like the Sevateem would be able to make boots of the quality that Leela wears (let alone that metal knife!). I think it would have been more likely that Leela would have gone barefoot like a female Tarzan.

Tom Baker is also great. At this stage, he was able to lead without always being the dominating centre of attention. We also get to see him being paralyzed by the power of the Fendahl skull. In later stories he would become pretty invulnerable.

This is story is one of the best of the Graham Williams era.
Posted by Matthew Celestine at 03:49