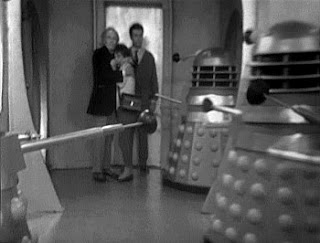 The First Doctor, Susan, Ian and Barbara land on a strange planet. Is that unearthly metal city inhabited?

This may not be the first Doctor Who story, but it is the story that made Doctor Who what it is. The creation of a vivid archenemy for the Doctor in this story gave the show a creative energy and dynamism that would enable it to last for three decades and then be revived later. In reviewing this story, one is also reviewing the greatest of Doctor Who's creations as a show.

There has been a tendency for some fans to rubbish this story, exagerrating its flaws. I think this is unfortunate. It is true that it has perhaps not dated well, but it is a landmark Dr Who story that is highly crafted for the most part. A common opinion is that the second Dalek story, The Dalek Invasion of Earth is much better. I reject that opinion. The Dalek Invasion is a great story, but the Daleks in that tale are not so well characterised. They are simply monsters with a mad scheme for conquering the universe. The Daleks gives them a history and a personality that is much richer. The Daleks in this story are survivors and victims of war. They are fearful and paranoid, obsessed with survival. They do not care for conquest but want only to destroy potential enemies. They are weak and pitiful. On the whole, I find The Daleks more enjoyable to watch than Dalek Invasion, though this is to a certain extent a matter of taste.

The most common complaint levelled against this story is that it is far too long and gets boring. This is not surprising, given that it is not written to be watched in one go on DVD, but in seven installments. These episodes are each coherent narratives that are gripping in themselves. Each ends with a fantastic cliffhanger. This is a serial, not a feature film and this has to be appreciated. 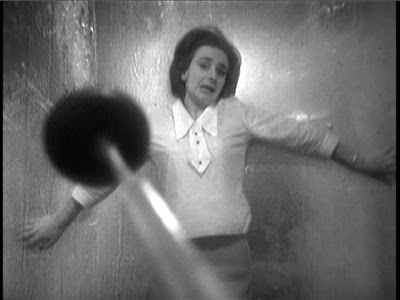 That cliffhanger at the end of episode one, where Barbara is confronted by an unseen menace, extending a sucker towards her is a truly iconic moment. Its hard to imagine the suspense this must have generated in viewers had never seen a Dalek before. When finally revealed, the visual appearance of the Daleks is brilliantly conceived. While not looking like robots, they completely lack any human features. One could never look for pity or compassion in such a faceless monster. These Daleks are smaller than later versions, which helps to make them look non-human. The brief glimpse of the Dalek creature inside the armour is wonderfully tantalizing in black and white. The malevolent character of the Daleks is slowly revealed through the serial. Their moral character is uncertain during the second episode, when we first encounter them.

The Dalek city is also well designed, both as a model shot (wonderfully complimented by an ambient electronic theme) and its creepy interior, with its narrow corridors and sinister surveillance devices. This is an unwelcoming environment indeed.

As with the previous story, the Doctor is not yet being portrayed as the hero he would come to be. He is very much an anti-hero, lying to Ian and Barbara so he can investigate the city and later quite willing to sacrifice the lives of the Thals. I don't understand the fans who neglect Hartnell; he is a pleasure to watch. The Daleks is probably not William Russell's best performance, but he does a decent enough job of being he stoic Ian. Jacqueline Hill is wonderful as ever as Barbara. Carol Ann Ford was also pretty good in trying to work with a character who was badly scripted as ever. 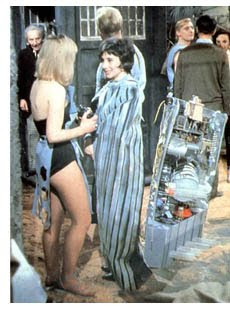 The Thals have come in for a lot of criticism, which I find hard to understand. I can't agree with the conclusion that they are all played by dreadful actors. They come across very well and each has a distinctive personality. What is most important to recognise is that they, along with the regulars, are taking the story absolutely seriously and playing it perfectly straight. There is no attempt at all to send up the premises of the story. When Doctor Who later failed to maintain this no-nonsense attitude, things would get wobbly. The Thal costumes have been ridiculed an awful lot, but they are interesting. Do we expect the inhabitants of other worlds to where jeans and leather jackets? Barbara evidently approves as she borrows a pair of Thal trousers and sandals (Barbara wears open-toed shoes more often than any other regular character in Doctor Who). Thal society is not well conceived; there seems a fair degree of ambiguity as to their level of technology. Strangely, Lawrence Miles and Tat Wood make the mistaken statement, in 'About Time: The Unauthorized Guide to Doctor Who' that there is only one Thal woman in this story (as in Genesis of the Daleks). There are in fact at least three Thal women.

Terry Nation was clearly somebody who liked the Dan Dare comic strips in The Eagle. Dan Dare, particularly the first story about the mission to Venus. The Daleks is very much an old fashioned space adventure. That is not what the sci-fi viewers of today are used to, so naturally this story comes across a little oddly. While it may not have aged well, it is an highly crafted tale with production values that were outstanding for its time. It is perhaps unfortunate that Terry Nation would plunder so much of the plot of this story for his later stories, which accounts for the sense of deja vu that many fans feel when they watch this story. The Daleks worked best the first time. The derivative Planet of the Daleks was a terrible mistake.
Posted by Matthew Celestine at 10:31