Shadow Of The Scourge by Paul Cornell (Big Finish Audio) 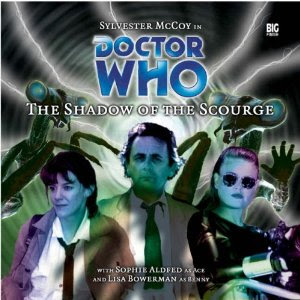 The Seventh Doctor, Ace and Bernice meet extra-dimensional horrors at a hotel conference.

This play is of course written by Paul Cornell, who I consider to have been the best of the New Adventures writers. The script for this story certainly does not disappoint. Its a play that really captures the feel of a well written New Adventures novel. Shadow of the Scourge uses the old-fashioned 'base under siege' format, but this is made interesting by the 'base' being an hotel hosting several conferences.

I think the cover is brilliant, especially seeing NA Ace in photoformat! It does however, rather oddly give the impression that the Scourge are insectoid, which does not quite fit the impression gained from the script or sound effects. They are presented more as demonic entities. The Scourge are typical New Adventure monsters, though the way they are used as a metaphor for psychological tension and doubts is very Season 26.

The Doctor is very much the Machiavellian manipulator of the novels, though Cornell takes the interesting step of having the Doctor's scheme falling apart immediately. Its unusual to listen to Sylvester McCoy pretending to come under alien domination. While this happened to the Seventh Doctor a lot in the novels, on television the McCoy Doctor was normally pretty invulnerable, like the Fourth Doctor in Seasons 16 and 17.

Its great to hear Lisa Bowerman playing Benny in a Doctor Who story. Bowerman's Bernice comes across as a lot posher than I had imagined the character. I must admit, I found Benny's snarkiness annoying. Would it really have been that difficult for her to have pretended to be a believer in that psychic stuff and refrained from ridiculing those at the psychic conference?

I was disappointed by Sophie Aldred's performance as Ace. She does not really have a feel for the brutalised, thuggish character of the New Adventures. I have noticed that people who have served in the military often talk differently to civilians and post-Dalek War Ace would certainly have spoken very differently to the teenager in Season 26. Aldred simply plays Ace as she has always done.

The reference to the McGann Doctor in this story is fun. The amount of technobabble was probaly unnecessary. On the whole, this is a really great audio play that is a must for anyone who indulges in NAstalgia.
Posted by Matthew Celestine at 10:57