The Curse of Fenric, by Ian Briggs (Target novelisation) 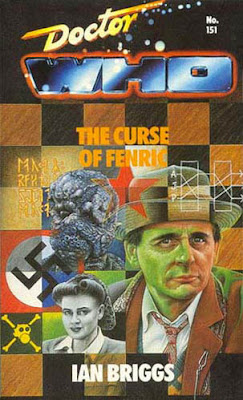 The quality of Target novelisations varied enormously, but a distinct improvement in literary depth can be seen in some of the novelizations of Seventh Doctor stories. The novelization of the Curse of Fenric, by it's original writer, is a good example of a novelization that attempts to provide a much deeper penetration into its source text. I think that the original serial was brilliant and this novelisation does not improve on the original (or remove all confusion about the plot) but it does provide a fascinating perspective on the story and enlarges on the writer's original vision.

The stark prose of this work has a somewhat avant-garde feel, but occasionally it becomes banal enough for you to remember it is a kid's book. Unlike most of Target novels it brings up sexual themes, with Millington and Judson's homosexuality made explicit and the surprising revelation that Miss Hardaker had a child out of wedlock (and was subsequently socially ostracised).

Many details are added to the televised story. The Russian soldiers are given distinct personalities and Nurse Crane turns out to be a Soviet spy (which seems to me a pointless addition). The story of how Millington's homosexual jealousy of Judson led to the latter becoming crippled is an interesting touch.

Particularly interesting are the editorial notes between chapters, which take the story in different directions. These include a schoolboy essay by Millington on the subject of Norse mythology and a letter from Bram Stoker about vampirism. Most interesting of all is an Arabian Nights-style account of the Doctor's first contest with Fenric. We learn that after defeating Fenric, the Doctor travelled for two years with Zeleekah, a freed Ethiopian slave. This is generally thought to have taken place during the Doctor's first incarnation, though few fans have considered exactly where in the chronology of the Doctor's life it occurred. I am dying to write some fan fiction featuring Zeleekah, though I find it hard to think how exactly to go about her character.

The novelisation is more upfront than the book in identifying the Doctor as a power of Good from before the dawn of time. Personally, I like this idea, though I do think it was better left ambiguous as it was in the serial.

The story gets even more confused when it comes to the subplot about the Ancient One and the dead Earth of the future. The book repeats the line about the dead world being the result of 'industrial progress' but it also seems to suggest that it is Millington's poison that creates it. It is implied that this future is prevented. I am unhappy with this. For one thing, it implies a temporal paradox. As I interpret the televised version, the desolate Earth of the Ancient One is the result of pollution and it is not erased. This should not be thought to contradict other Doctor Who stories set in the future. There is room for a desolate Earth (which will get repopulated by space colonists).

The novel ends with the Doctor meeting up with an older version of Ace in 19th century Paris, who has a relationship with Sorin's ancestor. Kate Orman's New Adventure novel, Set Piece would come to set up this surprising scenario.

The Curse of Fenric novel is a great read. It lacks the self-confidence and maturity of the New Adventures, but it is definitely a step in that direction.

Posted by Matthew Celestine at 12:17