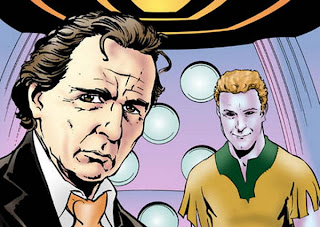 Death Comes to Time was a webcast made by the BBC in 2001, with an impressive cast of voice actors, most notably Stephen Fry and Anthony Head. It featured the Seventh Doctor, a surprising choice as it was made after the McGann TV movie.

This webcast is a colossal, epic drama that occurs on an overwhelmingly cosmic scale. Yet it is not epic in the silly over the top way of the new series' season finales. This story has a beautiful poetic feel. With it's orchestral classical score, a far cry from the sentimentality of Murray-Gold, Death Comes to Time feels very much like a Wagnerian opera. It is furthermore, a story that touches on religious and philosophical themes.

The story opens with a voiceover that is reminiscent of Bagpuss. It tells a fairy tale about a land of giants; an allusion to the Time Lords. This very much sets the tone of Death Comes to Time; it is more of a fantasy story than a science fiction story. You only need to watch this to realise just how shallow Moffat's notion of what the word 'fairy tale' means.

The big mistake of the TV Movie was to include too many of the shallow trappings of the show's past- the Master, regeneration, the Eye of Harmony. It assumed that the viewer would be interested to know that Time Lords regenerate and that they come from the planet Gallifrey. In contrast, Death Comes to Time does not tell us what Time Lords are, but shows us. We are introduced to the concept gradually through analogies like the beautiful parable about the painter and his painting.

Granted, Death Comes to Time gives us a radical revision of what Time Lords are. They are no longer a society of old men, but a race of gods who wield terrible power. Gallifrey is not even mentioned (though no doubt the three faces in the Temple of the Fourth are supposed to be Rassilon, Omega and the Other), but rather the Time Lords are wanderers in the fourth dimension. Fascinatingly, the idea of the TARDIS is deconstructed. The Doctor insists that his TARDIS contains no technology at all. It is rather portrayed more as a manifestation of some magic power that Time Lords possess. When the Doctor revokes the Minister's TARDIS, it is impossible not to be reminded of Gandalf breaking the staff of Saruman.

Death Comes to Time is often out of character with much of the history of the show. It is bizarre to think that the Doctor possesses the power to kill by thinking. Yet, we the idea of the Time Lords as gods can be found within parts of the Doctor Who mythos such as The War Games. For all that this story departs from continuity, the Doctor Who mythos is big enough to embrace a story like this; and it is a story that is made with passion and conviction. 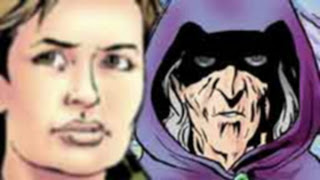 This story is rarely accepted as a part of true Doctor Who continuity on account of how it departs from other stories. Yet there are many divergent and conflicting threads within Doctor Who. I'm sure that most of the discrepancies can be explained away. While Ace does not become a Time Lord in the New Adventures, this Ace appears to be older. It could be a Post-Lungbarrow Ace. It has been argued that if the Master or the Rani could kill by thinking like the Time Lords here can, they would have done so. Perhaps they had not yet mastered that power?

What are we to make of the Doctor's death? As is the golden rule in fantasy and science fiction. if there is no body, you can expect the character to return. Perhaps the Doctor does not really die? If you hate the TV Movie, you could see it as an alternative regeneration into the McGann Doctor, one that happens offscreen. Or if you hate everything in the New Series, you could use Death Comes to Time as a reason to exclude the RT Davies and Moffat era from your personal canon.

It is a shame how little the BBC Wales series has drawn from Death Comes to Time, as this is Doctor Who done well.

Posted by Matthew Celestine at 13:44