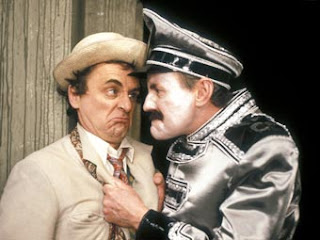 The first time I watched Paradise Towers, I found it extremely enjoyable. I was sucked into this surreal and fascinating world. Yet with each viewing of this serial, I am ever more conscious of it's faults.

Paradise Towers has a lot going for it. It offers a fascinating nightmare world based on the mundane reality of British housing blocks. It has a very clever and witty script that plays with language in a way not seen in any other Doctor Who story. It makes a fairly effective use of Mel and after the difficulties of Time and the Rani, we see Sylvester McCoy really settle into the role and make the Seventh Doctor his own. Watching him with the Kangs, we see a Doctor who is cool in a way the previous Doctors could never be.

Yet Paradise Towers is let down by a number of problems. The score is too loud and fails to fit the mood of the story. The sets are very well designed, but they are far too brightly lit, a common failing in 80s Doctor Who. While the Kangs are very enjoyable, they are quite obviously middle class drama school graduates.

The Chief Caretaker is a brilliantly conceived character. He is inspired by the very British phenomena of the overzealous council official who 'thinks he's Hitler.' Richard Briers performance does not quite do the character justice. While he has some glorious moments together with McCoy, most of the time he overplays the role and sends it up just a little too much.

One definite problem is that the world of Paradise Towers does not really make sense. The ages of the actors do not fit, we are given no explanation of why nobody ever leaves, we have no idea where the characters get their clothes or food or just generally how the whole society of the Towers works. This is not a problem in a story like Greatest Show in the Galaxy, where everything in the story is left mysterious. The problem with Paradise Towers is that we are given an awful lot of information about this society, but it still makes no sense.

Paradise Towers is not the highlight of the McCoy years and it is not even as good as Delta and the Bannermen, the story that followed it. Yet it was an important milestone in treading out a different path for the program. This serial was a bold experiment that offered a new and fresh avenue for Doctor Who.
Posted by Matthew Celestine at 10:47