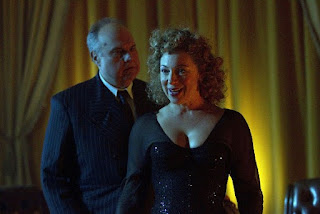 Amy is gone. At last; I don't know why they took so long about it. Amy was possibly the worst companion since Adric. A flirt with zero characterization, who can do anything that lazy writers need her to do. I don't get the people who think she looked attractive; she was far too skinny and waif-like to be pretty, not to mention those vacant stares.

In order to prepare us for the delight of Amy's exit, we are served up one of the worst stories that Moffat has ever given us. The Angels Take Manhattan is an horrible, thoughtless mess. It's a story that takes no time to generate a believable plot that makes any sense, and which attempts to bombard us with a sentimental emotional overload wrapped in Murray-Gold. We also get a return appearance from Moffat's Mary Sue, River Song, who only serves to get in the way of the presumed objective of giving Amy and Rory a good send off, not that I care. We get some moments of emotional drama with River, but these fall utterly flat because her character is too thin and undeveloped for them to stand on.

Moffat has a particular obsession with plots involving the mechanics of time travel, a trope horribly described as 'timey-wimey.' Such plots seldom make any sense and here this kind of story fails abysmally. The Doctor tells us that once they have read what will happen to them (he assumes the paperback is gospel truth and not fiction or an elaboration), it cannot be rewritten. That is in itself a great idea. I have always liked the Hartnell-era idea that time cannot be rewritten. But has not everything Moffat given us before attempted to make us believe that time can be altered at will? It is as though he has realized the dead end that 'time-wimey' plotting leads us to and made an half-hearted attempt too late to put the breaks on.

Weeping Angels were a delightfully scary idea. Unfortunately, they are an idea that gets old quickly. Hence, this story tries an whole load of new ideas with the Weeping Angels which fail to show any of the original power of the concept. The Angel babies were a little too silly and lacked the power of the proper Angels to terrify. The Angel Statue of Liberty was simply daft, as so many reviews have pointed out. Weeping Angels are great as a silent, unseen killer, but the idea of the Angels creating a battery farm of displaced humans just doesen't have the same impact. Do the displaced humans spend the rest of their lives in an hotel room? Do the Angels provide room service?

I'm just dreading what the next Christmas special will bring.

Posted by Matthew Celestine at 08:01