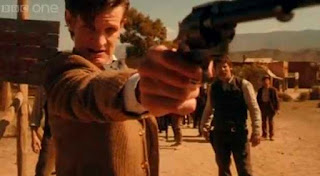 When we meet Kahler-Jex and find out he is a nice alien, it is a certain fact that he will turn out to be not as nice as he seems. We are also well aware that the cyborg alien will turn out to be more than just a brutal killer. I actually found myself reminded of the DWM story The Star Beast, in which the cute and cuddly alien, Beep the Meep turns out to be a wanted war criminal. That was actually a much more interesting story than this.

This story was just boring. It was flat and predictable, especially the very Star Trekl Next Generation debate about whether to hand over an unrepentant mass murderer to save a town full of innocent people. The whole thing was horribly sentimentalised with Issac's death and the horrible Murray-Gold music.

The resolution was terrible too. Kahler-Jex kills himself, thus removing any need for the Doctor to actually come up with a solution to the dilemma. Wouldn't life be so much easier if all the bad people just killed themselves? That is the worst kind of lazy writing.

Once again, we get racial issues swept under the carpet with the presence of a black preacher ministering to an otherwise white town. I am also irritated by Amy wearing a miniskirt. Does she not realize the hostility she is likely to attract when dressed like that in the 19th century? But then as JNT would do, Moffat has Amy wear a uniform in every episode no matter what the circumstances.

Give me The Gunfighters over this any day. The Gunfighters was actually about the historical events and circumstances, while still having fun with western cliches. This story just uses the western setting as a themepark backdrop to a banal science fiction story.

Posted by Matthew Celestine at 06:01