Dinosaurs on a Spaceship 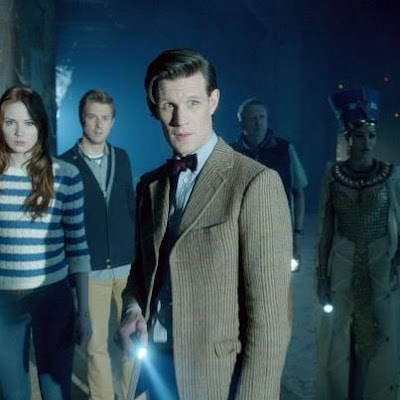 I can't believe I am writing this, but Dinosaurs on a Spaceship was not nearly as awful as I had expected. It probably helped that this story did not have the high pretensions of the previous disaster, Asylum of the Daleks. This was a story that set out to be enjoyable rubbish and for maybe a few times in the episode, I actually came close to enjoying it.

The very premise of Dinosaurs on a starship naturally sets alarm bells ringing. We are set up to expect a bonkers story that serves only to realize the absurd premise and provide a lot of all-out Dinosaur action. Indeed, the plot was a mess, but it was actually a little better plotted than I imagined. The spaceship turning out to be an Eocene vessel was a good idea, though it is a questionable one given that the Eocenes are not from the Dinosaur era (the creature in Dr Who and the Silurians is not a recognisable species and they co-exist with apes).

This is basically a story of set pieces, some of them comic, but with a surprising number of darker elements thrown in. It was a little odd to see the Doctor turning up with a gang of assorted thrown-together historical persons. This was especially jarring given that Riddell the big-game hunter played no real part in the plot. I think both Riddell and Nefertiti were disappointingly bland and their being paired up served more to irritate than amuse. I found Nefertiti's decision to sacrifice herself both predictable and banal.

That Rory's dad turned up serves to show how desperate the writers are to do something new with Rory and Amy. The pair of them have grown desperately tired. The thought of watching them any more is an appalling thought.

The real stand out element in the story was the villain Solomon. He was quite masterfully portrayed and very chilling. One major fault of the New Series is its lack of human villains. The reason for this is that with a short 45 minute episode, you can't spend much time fleshing out motivation, which is an essential quality of villains. It's much easier for lazy writers to throw in an alien monster. It was also refreshing to see the Doctor coolly despatching Solomon. The Doctor has killed before. He's not a pacifist, so get over it.

I was a little surprised by the Eocenes not having a weapon system. This does not fit at all with the aggression we have seen from their kind. I don't much like the New Series approach in making the Eocenes into sympathetic good guys.

This episode really could have been a lot worse.

Posted by Matthew Celestine at 10:20