Morgaine in Stormcage, by Matthew Clarke (my fan fiction) 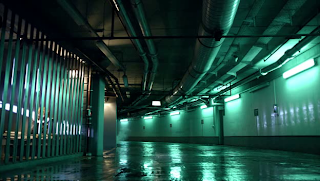 I have not written about any BBC Wales characters before, but River Song is an obvious choice for a prison series.


Having been incarcerated for 31 centuries, Morgaine was an expert on prisons. Most of that time had been spent at Ganymede Correctional Facility. That was a strict prison. Morgaine valued order and discipline and she admired the regime there. She had seen plenty of other prisons- HMP Holloway in the 21st century, the Lunar Penal Colony with its bizarre lack of segregation of the sexes (apparently they put contraceptive drugs in the food), an iso-cube in Megacity One and Necros Home for Delinquent Ladies. All of them had been marked with the mystical inscription which created the magic field necessary for her imprisonment. Escape had never been a possibility during those long, lonely centuries.

Morgaine was utterly unimpressed with Stormcage Containment Facility. Despite its grim, forbidding grey walls and bars, it was an utterly soft regime. The design of the prison was so antiquated. Holloway prison in the year 2000 would have been harder to escape from than this. The prisoners wore their own clothes. Her cellmate's strappy tops were perfect for distracting male guards. Back at Ganymede Correctional Facility, all of the guards had been female. They knew how to run things. They had sometimes forgotten to confiscate her cellmate's high heels- perfect for attacking guards with. In fact, Morgaine's companion in incarceration must have had a dozen useful objects for effecting an escape. No wonder she was constantly coming and going as she pleased. If Morgaine had been prison governor, there would be a lot more cell searches and a lot more strip searches. She would have done those herself and enjoyed it.

At the present moment, River Song had decided she was happy to stay in her cell. She lounged on the bunk trimming her nails. She was dressed casually in jeans and a t-shirt.

Morgaine had been telling her cellmate about how she had bound Merlin in the ice caves for all eternity.

"Yes, you have told me all about that a thousand times," said River. "And now you are locked up. However, you keep bumping into Merlin's past self. Very timey-wimey."

"I suppose you might say that," replied Morgaine. Why couldn't she have a cellmate who was young, cute, light and fluffy? Those were the sort of girls whose company she enjoyed on those lonely prison nights. River was too absorbed by her blasted lover to take any interest in more immediately available intimacy.

"Let me guess, sweetie," said River. "Your Merlin looks like a trendy young executive in a pinstriped suit?"

"Okay, how about a sad old man with a massive nose who never got over his mid-life crisis?"

"A boring young thing who wears a stick of celery?"

"A tall chap with blond curly hair and terrible dress sense who never shuts up?"

"Okay. We're narrowing it down. How about a tiny Celtic chap who makes funny faces when he gets angry?"

"Exactly. You finally got it. I take it that is your Merlin?" said Morgaine.

"Oh no, mine is a more advanced model. Much cuter, sweetie. It won't be long before he's mine."

River might have called Morgaine 'sweetie,' but she had no interest in girl-on-girl fun. 'Boring wench' thought Morgaine to herself.

"Enjoy him while you can," sneered Morgaine. "When he falls into my hands I will bind him in the ice caves forever! From my wrath there is no escape."

"You bitch," cried River. "Not if I rescue him!" She threw a slipper in Morgaine's direction.

This was more like it. Morgaine picked up her pillow, ready for a counter-offensive.
Posted by Matthew Celestine at 02:32