Revenge of the Swarm 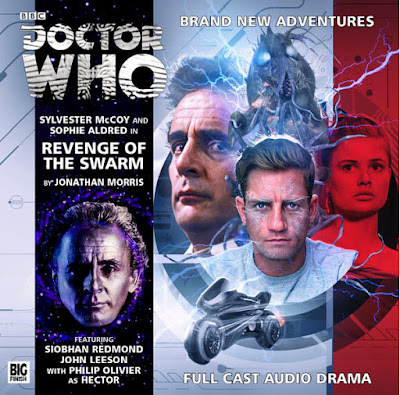 I doubt many fans were campaigning Big Finish to bring back the Swarm from Invisible Enemy. It's not the most memorable monster, but it was not an uninteresting one. As laughable as the Nucleus shrimp-like appearance was, there was something appropriate about it. Some crustaceans may be good to eat, but there are a lot of crustaceans which are nasty parasitic creatures, which fits quite well with the Swarm. Could it be that the Swarm is not actually a virus, but a microscopic crustacean, a mini-Macra? I think there was a real potential for Big Finish to make the Swarm a terrifying adversary. Unfortunately, Jonathan Morris chose to send it up, continually mocking its Napoleon complex. It does appear that the origin of the Swarm has been changed. The Invisible Enemy told us that the Swarm had been floating in space for millennia. According to this audio, the Swarm was created in a laboratory. I find this new origin banal. The idea of a virus mutating in a test tube is not nearly as interesting as the very Quatermassy notion that space is filled with terrible things just waiting to infect us.

Revenge of the Swarm does not just send up the Nucleus. It does not seem like anybody involved is taking this story very seriously. We get an awful lot of silly voices here, like this is being made for young children. It does seem like the worst aspects of the Graham Williams era are being invoked in this.

I haven't followed the Hex arc, as I don't like the way that these stories fail to fit wwith the Virgin New Adventures development of Ace. I therefore have no idea how Hex came to have his personality replaced by Hector. It seems a bit odd to have a new character become replaced for much of his first story proper, though the New Adventures did exactly the same thing with Bernice n Transit. Which leads me to another interesting point about this audio. Although the plot of Revenge of the Swarm is disappointingly close to being a remake of The Invisible Enemy (as well as a prequel and sequel combined), it is also a plot that was done quite a few times in the Virgin New Adventures. An alien entity attempts to take control of cyberspace. This is basically a Virgin New Adventure story with the tone of a Graham Williams story.

Revenge of the Swarm manages to be fun, but it rather fails to do anything interesting with its source material.

Posted by Matthew Celestine at 10:47